Wanna blog? Start your own hockey blog with My HockeyBuzz. Register for free today!
Yesterday the Buffalo Sabres made another move to try and improve their blue line. They acquired 20 year old Henri Jokiharju in exchange for Alex Nylander. It is the latest in a string of moves to try and revamp a group that struggled to move the puck and create offense. Jokiharju joins Colin Miller and Brandon Montour as recent additions to the right side of Buffalo's back end. These moves open the door for a Rasmus Ristolainen trade which has great potential for Buffalo. There are many teams who will perceive Ristolainen’s value to be higher than it is.

When Jason Botterill was hired by the Sabres they had one of the worst blue lines in the entire league. The group included Rasmus Ristolainen, Zach Bogosian, Josh Gorges, Justin Falk (no not that one), Taylor Fedun, Dmitry Kulikov, Cody Franson, and Jake McCabe.

The recent moves by the Sabres got me thinking about the shift in the kinds of defenseman the Penguins used to target versus the kind that they currently target. Buffalo seems to be focusing on puck movers and offense while the Penguins have shifted towards a push back mentality in recent years. Right now the Penguins defense is their greatest weakness.

There are three different time periods I decided to look at with the Penguins and the kinds of additions they made on defense via signings and trade. The first time period was June 6, 2014 to May 10, 2017. This was the time both Jim Rutherford and Jason Botterill worked together.

Overall you have a group of players known for their skating and/or puck skills. Ron Hainsey was the last addition during this time period and he sticks out like a sore thumb. Even a “tough” defenseman like Ian Cole had the ability to facilitate a breakout and contribute in a positive way. Most of these players were bought “low” and the team banked on making the most of their skill sets.

Ehrhoff was a one year UFA deal where the team got decent value. He could move the puck and his 0.8 points per 60 at 5v5 was only bested by Letang at 0.85.

Ben Lovejoy is the only one who came at a cost that somewhat mattered. If not for concussions Simon Despres was tracking towards being a decent enough # 4 or #5 defenseman.

Ian Cole was a prudent trade providing the team with a solid depth player and it only cost Robert Bortuzzo. A player known more for toughness than his play with the puck.

Trevor Daley for Rob Scuderi! It was addition by subtraction then Daley played the best hockey he had in years. Daley could skate and handle the puck.

Justin Schultz was in a deployment nightmare in Edmonton. The Penguins bought low on him and gave him proper usage. Schultz was able to flourish. Things have changed in recently and not in a good way for Schultz.

Chad Ruhwedel is what he is. A seventh defenseman who is right handed and can jump up to give you some minutes in a bottom pairing role. He is dirt cheap and certainly does not cost 4M on the cap.

Ron Hainsey's cost to acquire was actually more than Justin Schultz (2nd vs 3rd round pick). He was acquired at the tail end of this time period. Hainsey played top pairing minutes and got caved in with Brian Dumoulin. The only thing that saved the 2017 Penguins was their PDO. The shot volume given up by Hainsey was masked by Fleury and Murray's brilliance throughout the playoff run.

The next time period is from May 11, 2017 to today. This is the time period Jim Rutherford has been away from Jason Botterill

This group does not have the puck moving ability and offensive upside of the previous group. The decisions made during this time period have turned what was a functional group of defensemen into a one pairing team. There are some real egregious self-inflicted errors on this list. It started with the signing of Matt Hunwick. It ultimately cost the Penguins Conor Sheary and his more than reasonable 3.0M cap hit, 500k less than Brandon Tanev.

The Jack Johnson thing speaks for itself, it has been catastrophic. Johnson’s presence has is currently undoing the value of having Justin Schultz. The reason Schultz was available for cheap is because his deployment in Edmonton was rotten. It is rotten again. Schultz and Johnson are one of the worst pairings in the NHL. With proper usage Schultz can do a lot of things to help the forwards do their job. Right now he can’t. Déjà vu.

Erik Gudbranson is way overpaid and you could argue his 4M is why the team is looking to trade Bryan Rust and why they lost Olli Maatta. Maatta is a guy who would fit into the mold of players from the first list.

Juuso Riikola is going to be 26 years old this season. Some people are holding out hope that he will graduate to someone better than replacement level, I’m not one of them.

Jamie Oleksiak was a decent acquisition, until he wasn’t. He was a functional bottom pairing defender making reasonable money. Oleksiak was tied up in Rutherford’s personal anguish and struggle with Tom Wilson. Oleksiak got one-punched and thus was not deemed to have enough “push back”. Oleksiak being traded away opened the door for the Johnson blunder.

Marcus Pettersson is the lone bright spot on this list. He only has one full year under his belt, but there are signs that he could jump up and play with Justin Schultz in the second pairing. He is the closest example to the players on the first list. A buy low candidate with a skill set that can perhaps help the Penguins forwards.

The last group is from the same time period as the second group. These are the players Jason Botterill has added via signing or trade since becoming the general manager of the Buffalo Sabres.

It’s not a sexy group of players, but you can see a theme of puck moving and offensive production, especially with Montour, Miller, Jokiharju, and Pilut. The worst example on this list is Matt Hunwick and he’s only there because it was the cost of acquiring Conor Sheary, as mentioned above. Throw in Rasmus Dahlin with the expiring contracts of Marco Scandella, Zach Bogosian, and Matt Hunwick and the Sabres are slowly, but surely digging out of their mess on defense.

When the Sabres move Ristolainen for forward help it will be the cherry on top as Ristolainen is just an overpriced better version of Gudbranson. The difference being Ristolainen is able to rack up some points on the power play. 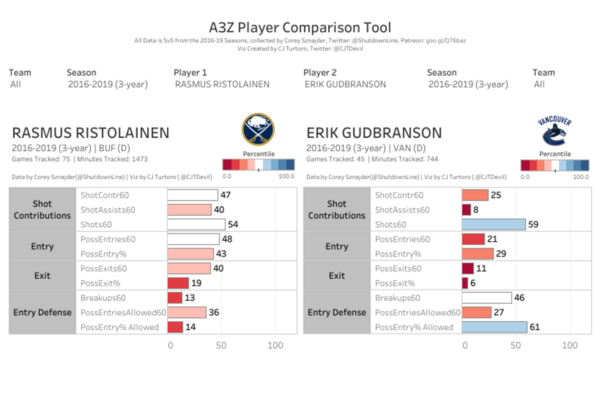 Another area to track is the success of the AHL teams in each organization. Botterill worked hard as WB/S general manager to keep the pipeline stocked so that the Penguins could have ELC options able to make contributions each year. The Amerks had been a disgrace for years. Here is a snapshot of the AHL programs

There is an early trend forming and it is one that isn’t likely to help the Penguins. Instead of having ELC options they have depth players like Brandon Tanev, Jack Johnson, and Erik Gudbranson making bank.

All that said, I do not subscribe to the theory that Jason Botterill made all the good moves in Pittsburgh and Jim Rutherford made all the bad moves. It’s an overly simplistic, lazy, and wrong way of looking at things. I do however believe there is nobody left in the Penguins front office whose voice can ring as loudly as Botterill’s did. Nobody seems to be providing any “push back” on Rutherford’s recent tendencies and preferences. Without that voice the Penguins have curiously shifted away from the kinds of players that made them back to back Stanley Cup champions. They are more worried about “being hard to play against” than actually being hard to play against (having the puck and doing positive things with it). Looking at how the Penguins and Sabres are currently building their back end is a microcosm of this. The Sabres are trending in the right direction while the Penguins defense is a real point of weakness.

Join the Discussion: » 108 Comments » Post New Comment
More from Ryan Wilson
» We know how the NHL wants to return now we know the when
» NHL outlines detailed return to play plan against tough odds
» No get out of jail free cards for real or arm chair general managers
» Edmonton lures NHL with plagiarized non-Edmonton footage
» Most players not comfortable with NHL restart plan