Wanna blog? Start your own hockey blog with My HockeyBuzz. Register for free today!
As of right now the Penguins are locking their sights on former Winnipeg Jet, Brandon Tanev. This morning I pointed out how there isn’t really a lot of room for him

This one I could definitely see. He kills penalties and blocks shots. He had a 1.53 points per 60 last year which is at least something. It is more than Nick Bjugstad or Jared McCann in 2018-19. I just don't see where you would put him. He's going to come in at 2M or higher. You want to pay that premium for somebody who likely slots in on the 4th line? Where does he go?

The line combos are irrelevant for the sake of this discussion. There are ten players listed there. How many are getting moved down for Tanev? Dominik Simon is a better player than Tanev and is way cheaper. Seems silly to block Kahun from an opportunity just after trading for him? The more I look at this the more I don't understand the need for a bottom six player at all. You still have Teddy Blueger and Zach Aston-Reese as part of this.


Now, the Penguins could do something really great here even if it is unlikely. I don’t think the moves are outrageous, but there are some moving parts which always complicates things.

Pittsburgh would need to shed some money. Bryan Rust would be the likeliest candidate to move out. Where does he fit if you sign Tanev, added Kahun, and added Galchenyuk? I just don’t see one.

You could probably find a team to take on Jack Johnson with Bryan Rust for some low level draft pick. Or you could always use a first round pick to package Johnson with. Ottawa just gave Ron Hainsey years and money so find someone like that. Moving Bryan Rust in a separate deal wouldn't be hard at all. I'm sure a team like Buffalo would be all over it.

Use your savings (assuming Tanev isn't making Rust money) and sign Jake Gardiner(!) even if it is at the ~7M range. I have not heard a lot of chatter on Gardiner at all this free agency period so the door appears open for somebody to give him an offer.

Gardiner's addition would immediately improve Evgeni Malkin (an by extension Galchenyuk) and it also makes Justin Schultz a player that can have a positive impact on the team. 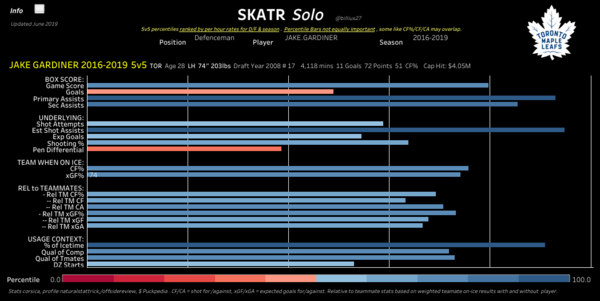 Look at him. Plays big minutes, good underlying numbers, and also able to contribute tangible offense. This is exactly the type of player the Penguins need to reshape their roster moving forward. You can shuffle around as many forwards as you want, but if the defense doesn’t change it won’t really matter

You want the old Evgeni Malkin back? This is how you get it

There is a path to this result. Even if it isn’t likely.

Join the Discussion: » 101 Comments » Post New Comment
More from Ryan Wilson
» We know how the NHL wants to return now we know the when
» NHL outlines detailed return to play plan against tough odds
» No get out of jail free cards for real or arm chair general managers
» Edmonton lures NHL with plagiarized non-Edmonton footage
» Most players not comfortable with NHL restart plan