The Wild has a game left against the St. Louis Blues and Chicago Blackhawks so to a certain extent they control their own destiny going forward but also currently the Nashville Predators have a 2 point lead in the Central Division. Basically assuming the Wild does epic collapse in last 5 games of the regular season, they will face the winner of the Central Division because the Ducks have a 4 point lead on the top spot in the Western Conference playoffs with 3 games to play.

I personally believe the Ducks is the toughest matchup in round one for the Wild so I am really rooting for the Predators or Blues. The Ducks added two top 4 defenseman at the trade deadline in addition to flipping young forwards with Montreal. I really view Anaheim's makeup as the toughest matchup for the Wild because they are big and skilled. Also for whatever reason they have really had the Wild's number the past couple years no matter how good our guys have been at the time.

Both the Blues and Predators have stacked lineups top to bottom and for that matter so does Chicago but I have been really impressed with how the Wild has responded this year against their Central Division rivals. Obviously you have to be very careful rooting for your team to draw Pekka Rinne to open your run at Lord Stanley's Cup. Also the Blues seem to get a sick pleasure out of battering the Wild's tiny talented types (Granlund,, Brodin, Spurgeon, Etc) so maybe that is a tree we should not be excited about barking up either.

I am almost relieved that the Ducks and Blackhawks will not be on the radar until at least round 2, don't get me wrong I certainly have faith our boys can vanquish them in a seven game series just would like to get feet wet against a team like was the case last year in the Colorado Avalanche series.

Matt Dumba: The Man, The Myth, The Legend

I have really tried to temper and contain my excitement about Matt Dumba's increased role in the Wild lineup because it seems as much as he earns some slack on the leash from bench boss Mike Yeo, he is very eligible to get yanked back quickly. Dumba is a kid that is always a genius moment away from breaking a game wide open and bringing the fans to their feet.

Dumba plays that firehouse hockey when he gets it churning and he goes end to end creating chaos for opponents and opportunity for teammates. Dumba has been getting some serious trust and extension of his role and ice time which has been a credit to his effort to win over Yeo. Dumba has been taking baby steps forward this season and he certainly has the look of a shark more often recently than a scared kid hedging to no make a mistake and get yanked.

Many of us internet writers/bloggers have been gushing about the potential and excitement that Dumba's game has the potential to translate to at the NHL level. Truth to be told Dumba is exactly right now what I believed he could be when the Wild drafted him. The thing that has been so impressive to me about Dumba has very little to do with the on ice talent and skills though, instead it has been his humility and work ethic.

Dumba to his credit has handled setbacks and let downs very well considering how much prospect geeks like myself have pumped him up since the very glimpses we had of his game after being selected 7th overall in the 2012 NHL Draft. There are plenty of things that Dumba can improve about his game but this is a 20 year old kid that creates dynamic moments at the highest level of hockey. Dumba is only getting more comfortable and skilled at picking moments to activate himself on the rush which opponents will have to adjust accordingly to going forward.

Dumba has the type of game breaking dynamic talent that is hard to contain within a disciplined and consistent system in the defensive zone but what has been so impressive about his sophomore campaign is that he has limited his mistakes and improved his positioning and gap control. Dumba struggled often last year being out of position in his own zone so it is clear he worked hard to address it in Portland last year and even during the course of this season.

The Bottom of the Roster Rotation is Yeo Knows Best Material

We joked about it on #WildWednesdayShow which I will provide below but basically I have used the hashtag #YeoKnowsBest to poke at decision making process and stubbornness that has plagued the bench boss. Dont get me wrong I have had to eat my words on Yeo two seasons in a row, so I wont pretend that he isn't earning his keep. I will say though that fans should expect Nate Prosser back in the lineup along with probably Matt Cooke sooner rather than later.

That will mean players we would rather see in the lineup taking a seat for guys Yeo has proven he will default to in the past. Now with a legitimate log jam at forward Yeo will really need to get his lineup decision correct because as we have seen the speed of Jordan Schroeder has been a difference maker. The hockey IQ and work ethic of Justin Fontaine has been so important to generating secondary scoring this season on every line he has played.

Even now it appears Erik Haula despite improved performance and result fell victim to the return of Ryan Carter. With a veteran group of players healthy and scratched that should include Cooke, Carter, Sean Bergenheim, and Prosser on most nights it will be very compelling to see how Yeo handles the bottom of the roster come playoff time.

Lost in the huge successes of Dumba and feel good return to the State of Hockey by Jordan Leopold is that Christian Foolin has been scratched for an extended period despite being the biggest skilled defenseman in the mix for 3rd pairing minutes for the Wild. Folin has fallen victim to not being a left defenseman basically or more accurate it maybe he has fallen victim to Jonas Brodin not playing on the left side.

I believe the optimal top six defenders on this roster are Ryan Suter, Brodin, Marco Scandella, Jared Spurgeon, Dumba, and Folin. Leopold and Prosser have benefitted from Yeo keeping Suter/Brodin together but I am very interested to see come playoff time if he finally elevates Dumba to play with Suter allowing the natural complimentary pairing of Brodin with fellow Swede Folin to round out the lineup.

That's all for now. I am crazy busy right now so I apologize for not creating more content here for the #WildHBcommunity thanks for always supporting me and keeping the conversation going. 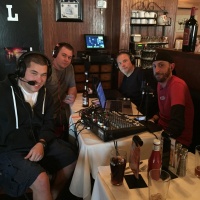 **If you are interested in sponsorship or advertising your business in the Twin Cities Metro area on this column, please send a message for more information by clicking on the “Contact” button at the top of the page.**

Join the Discussion: » 49 Comments » Post New Comment
More from Tony Dean
» Hopefully Absence Makes the Heart Grow Fonder Wild State of Affairs
» Wild Looking to Bounce Back from Loss Hosting Edmonton Oilers at the X
» With Ducks on Deck Yeo's Club Must Show Ability to Punch Back
» Game Night at The X Plus Listen to WildWednesdayShow Between Periods
» After Five Games More Questions Than Answer for Yeo's Wild Squad