I realize that I have been missing in action for the greater balance of two weeks, so my reemergence now should help to usher in the NHL offseason and forward the future of our favorite franchise. There is no positive way to put it, the veteran core and young core completely melted down against the enemy they should have been prepared for above all else. The Minnesota Wild has now been eliminated from contention in Lord Stanley's Cup Playoffs three straight season by the Chicago Blackhawks.

Nobody was more invested and confident in the group Chuck Fletcher put together in 2014-15, than myself to see them eliminate St. Louis in such convincing fashion only to never be in the Chicago series mentally is devastating for me. Such is life though and I choose to look ahead to next year rather than dissecting each and every error and individual failure by this current group as their season ended.

Believe you me, I had a meltdown moment or two during that debacle of a Chicago series but I kept them close to the vest because I realize nobody likes a sloppy writer/blogger lose his [email protected] moment on social media going full negative. That said it is time to get into what's next. The Alive and Social Network Wild Wednesday Show will be hosting a Special 2015 NHL Draft Party at Bennett's Chop and Rail House. Please join us June 26th at Bennett's 1305 7th Street W., St Paul, MN 55102 (651) 228-1408.

Top priority for the Minnesota Wild is to evaluate and project their NHL roster and organizational prospects for the 2015-16 NHL season. The immediately looming issue for Fletcher is getting Devan Dubnyk under contract before the NHL Draft and certainly before July 1st which is the opening of unrestricted free agency. For the fanbase it is a no-brainer for the Wild to do everything in their power to make the return of Duuuuuuubs, a reality but for Fletcher he must be very careful not to give too much or over commit. Dubnyk was a game changer last season and his size and talent between the pipes shined for this team after his arrival trade. The truth is though as much as the Wild needed Dubnyk last year, he certainly should appreciate how great an opportunity he has been afforded here. Dubnyk was a 1st round pick in 2004 and member of multiple Canadian Junior Worlds rosters, so it is not as if he magically just appeared out of thin air. Dubnyk was drafted by his hometown team in Edmonton and handed the keys to the car essentially as their #1 guy between the pipes only to play his way out of town.

I think the leveraging between Dubnyk's agent and Fletcher will most certainly take into account that playing between the pipes in christmas colors is certainly the optimal situation for both sides in the negotiations of his next contract. Honestly the sooner this deal gets done the more time Fletcher has to improve the roster around "The Savior" Dubnyk. I have to believe Dubnyk will get a 3yr/$4mil per season type of deal which is certainly reasonable given his resurgence but lack of consistent success.

Once Dubnyk is crossed off the checklist for Fletcher, it will be all eyes on Mikael "FinnishBabyJesus" Granlund. I realize that Granlund being a RFA will have his next contract most likely not be agreed upon until right near the beginning of training camp. Instead what i mean by Granlund being the next priority, is Fletcher and his front office staff must make a determination on the young Finns ability to be the #1 center for this team and shake off a disappointing 39-point junior season in the NHL.

In Granlund the Wild must decide what they have now and if he projects to produce points to the level his top prospect in the world hype once promised. Granlund certainly creates moments with the puck where fans hold their breath and light up with optimism that he is who we thought he was. Other times though a strong breeze knocks him off the puck and his skates. Granlund has been afforded every opportunity to put this team on his back as the superstar playmaker elite level talent he has flirted with becoming.

I appreciate that Granlund has worked hard to be much more than an offensive playmaker, and his effort in the defensive end and improved board play has been an interesting development. The truth is though, this team has given him the top center spot and two veteran scorers in Zach parise and Jason Pominville at his disposal so 39 points is a dramatic under achievement no matter how anyone tries to sugar coat it. Fletcher finds himself locked into an aging veteran core with limited mobility due to the money they are owed and contract stipulations on movement of them even if he was able to find a willing trade partner. To make matters more complicated Fletcher must find a remedy at the pivot position because as it stands Mikko Koivu is going to be another year older/slower and Charlie Coyle although improved as a center this year has definitely not blown anyone away in the middle of the ice.

When pressed by people to identify the most pressing need for the Minnesota Wild into the offseason, I immediately gravitate to Top 6 Center. Mind you that is the most pressing need for over half of the NHL teams but I think Fletcher will live and die with his evaluations and projections of the current roster players that fit the description of that position. It is clear that Granlund, Coyle, and Koivu are all talented players and key to the success of the Wild going forward. The organization has to come up with a solution at the pivot position this offseason in my opinion to cure what has been an ongoing shortcoming for the organization. I have seen people up in arms over the suggestion that Jared Spurgeon could/should be made available via trade this summer. I would just say that from my perspective, a couple things must be mentioned before I get savaged like other have for mentioning the move of mighty mouse maybe a benefit to the Wild.

Currently as it stands the Wild has a top heavy blue line with Ryan Suter locked in as the anchor and three defenders currently available for only 2 spots in the Top 4 pairings. Spurgeon, Jonas Brodin, and Matthew Dumba all play right defenseman. Brodin is a left hander which is perplexing but he has come out and stated publicly that he is more comfortable playing the right side.

In Dumba we have since just a glimpse of his ultimate potential and game so far as he is just 20 years old. If I had my way Dumba would have been paired with Suter far sooner this season. Yeo MUST get them paired early in camp so that Suter can be the safety blanket for Dumba allowing him to activate and be the fire starter. Suter's role must evolve as well as no defender did less point productivity wise with more the Wild and really in the entire NHL.

In Brodin you have a guy that pairs perfectly with Marco Scandella so if Spurgeon is to be included in some package whether it be at the draft or later, the Wild's Top 4 is already filled out. The other bit of reality about why Spurgeon's name is being targeted as available is his value to other teams as a young mobile puck mover and his current contract situation for the Wild. Spurgeon is in the last year of his deal set to be $3.6mil cap hit. Fletcher has painted himself into a corner with so many 30+yrs old veteran contract that are nearly unmovable.

If I had my way, Fletcher would find a way to get value in a deal shipping out Pominville but that is for another time and blog haha. Spurgeon has the most value of any player Fletcher could make available this summer beside maybe Granlund but that would be a huge leap. I really think a Spurgeon + Erik Haula package could return a significant piece this summer. I dont expect any of the unrestricted free agents to return except maybe Ryan Carter and Jordan Leopold. Fletcher would have to chef up a miracle to get anyone to take Niklas Backstrom in a deal so look for a buyout on him. Chris Stewart is going to get paid by a desperate GM somewhere in July. Keith Ballard may not retire right away but I just don't believe he will return to the NHL let alone the Wild. Nate Prosser could find himself back here but it would certainly be on a two-way deal at the end of summer if anything.

I bet Kyle Brodziak did enough during the final months of the season to get a team to give him a decent 2-3 year deal away from Minnesota. The Iowa Wild's atrocious season makes it very tough to know how Fletcher and his front office feels about any of the major contributors down there. Jonathan Blum has been a true professional down there and has been productive but as an RFA, I am not sure his future is with the Wild.

Last but not least I want to offer up my sincere best wishes to Josh Harding because I have such a huge amount of respect for him given how his professional and personal life has played out in such a public fashion. Harding's story is such a heartbreaker given his perseverance and adversities. I am not sure if he will officially announce his retirement from hockey this offseason but I will always root for him in anything that he takes on in life. 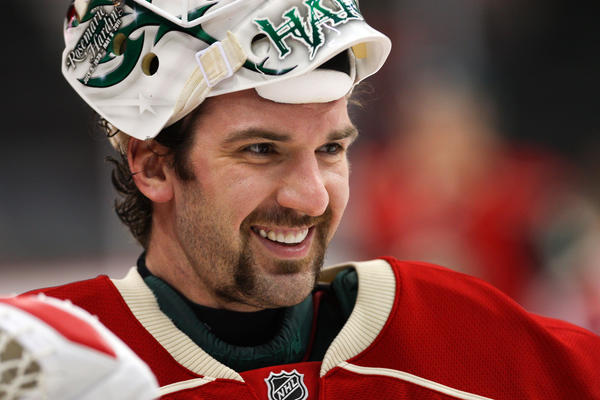 
**If you are interested in sponsorship or advertising your business in the Twin Cities Metro area on this column, please send a message for more information by clicking on the “Contact” button at the top of the page.**

Join the Discussion: » 18 Comments » Post New Comment
More from Tony Dean
» Hopefully Absence Makes the Heart Grow Fonder Wild State of Affairs
» Wild Looking to Bounce Back from Loss Hosting Edmonton Oilers at the X
» With Ducks on Deck Yeo's Club Must Show Ability to Punch Back
» Game Night at The X Plus Listen to WildWednesdayShow Between Periods
» After Five Games More Questions Than Answer for Yeo's Wild Squad