Wanna blog? Start your own hockey blog with My HockeyBuzz. Register for free today!
Our next goaltender to focus on is a Pittsburgh native popular in armchair GM trades. He has an early track record of great success, but has fallen on harder times in recent years. You’ve all seen the wishful John Gibson to Pittsburgh trades now let’s try and sort some things out. 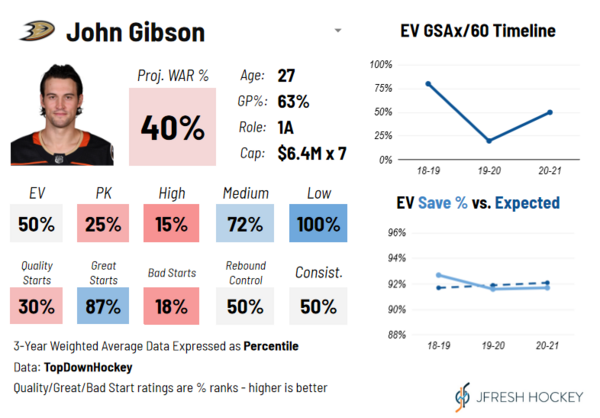 Gibson has not been the goalie he built his reputation on the last few seasons. Anaheim isn’t a great team, but Gibson hasn’t helped the cause as of late. The last two years he has gone .904 and .903.

Here is some context for Gibson’s career with his goals saved above average numbers. 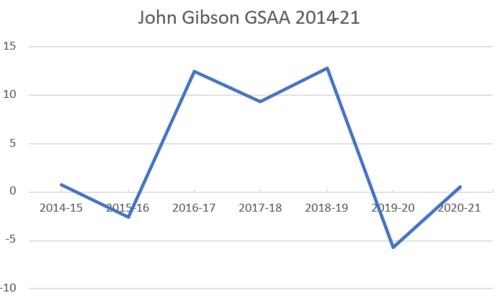 He’s had some monster years between 2016-2019, but just as many pedestrian ones, including the most recent two. Gibson is only 27 and can certainly bounce back and have more great seasons. That wouldn’t be my main concern. Cost to acquire would be the problem and I think it would be a problem for both teams.

The Penguins and Ducks are not natural trading partners for what the Penguins are trying to do and for what Anaheim should be doing if they are willing to move Gibson. First, if the Ducks are moving on from Gibson they are waving the white flag on their current situation and moving towards a proper rebuild. Gibson is 27 and is signed for six more years at 6.4M. It makes little sense to move on from a decent contract like this if you want to win in the present. The Penguins also want to win right now as they are trying to do their best to keep the Crosby/Malkin window open. Trading impact players, the kind of impact players needed in a trade for Gibson, isn’t going to help the window much for the Penguins. What Anaheim should be looking for in a Gibson trade are quality futures. What Pittsburgh doesn’t have... quality futures.

You see these trade ideas which include Jake Guentzel and they make no sense on any level. How does that help the Penguins? It is a lot harder to find legit consistent scoring wingers than it is to find competent goaltending. You take Guentzel off the Penguins and you lose a lot of dependable goal scoring on a team that is aging. Also, a team with a big decision to make on Bryan Rust coming up in the near future. Trading Guentzel is a lateral trade at best and a horrific one at worst. I use Jake Guentzel as an example because what else would the Ducks want from the Penguins active roster that makes any sense? Guentzel is one of the few quality players in their prime on the Penguins otherwise the Ducks can go elsewhere to find quality futures if they even want to trade Gibson at all. Gibson’s trade value shouldn’t be something like Jared McCann + whatever. Anaheim will have done a poor job if it is.

I think the John Gibson trade talk as it pertains to the Penguins gets fueled by the zip code he was born in. I don’t see natural path for these teams getting together on a trade involving him.

Join the Discussion: » 38 Comments » Post New Comment
More from Ryan Wilson
» Breaking down the Heinen seinen
» Thoughts on Ron Hextall's thoughts
» Penguins continue to go all McGinn on overpaying depth players
» Some unqualified RFA's to look at if Penguins aren't big game hunting
» The Penguins should go save Marc-Andre Fleury