Wanna blog? Start your own hockey blog with My HockeyBuzz. Register for free today!
Follow @VGK_Buzz 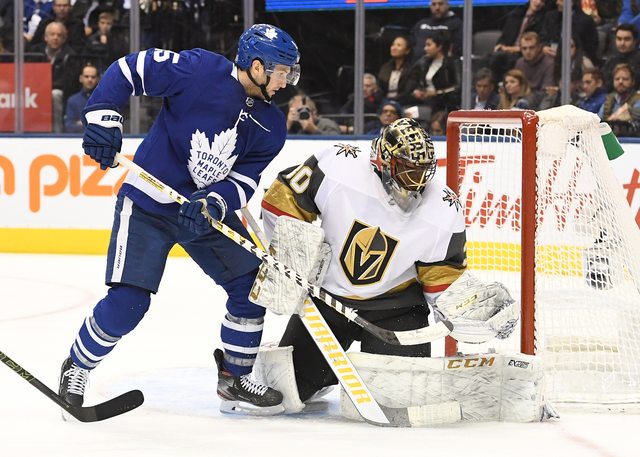 Malcolm Subban got the start, but needed more support (USA Today Sports)
With incumbent starter Marc-Andre Fleury still recovering from a flu this past weekend, backup netminder Malcolm Subban made his third start of the season for the Vegas Golden Knights. With flower on the bench, it was Subban’s chance to have a big game. It was his chance to change the minds of the contingent of fans who swear that he’s not good enough. On Thursday evening in Toronto, it was Subban’s chance for vindication and his first win of the 2019-20 season.

With all eyes on him and a team full of superstars across the ice, Subban turned in masterful performance. He made one big save after another, finishing the evening with 35 saves on 37 Maple Leaf shots on goal. His performance was one worthy of a win, but in true Golden Knights fashion, the team was unable to get their backup into the win column. A John Tavares 2-on-1 goal sealed Subban’s fate, once again finding himself in the loser’s column.

"Subban is the reason we got a point. He made some huge saves for us."
- Max Pacioretty

”….I wish that I could cry
Fall upon my knees
Find a way to lie
About a home I’ll never see…”

Jonathan Marchessault has said it once before, Subban may have the hardest job in all of hockey. As a backup goaltender, you’re called upon sporadically and expected to be sharp enough to win your team games. Making his job even more difficult, is the fact that Subban tends to play tough opponents, in their home arenas. Dating back to his arrival in Vegas, Subban has appeared in a miniscule 20 games inside the T-Mobile Arena.

This past Saturday, Subban was the tough-luck loser in an overtime game against the Winnipeg Jets. He turned away 35 of 39 shots in the losing effort. Thursday night had to have felt like déjà vu because he suffered the same fate against the Maple Leafs. Subban and the Golden Knights dropped another game, during the 3-on-3 overtime, an epidemic in which the team is desperately seeking a cure. They’re essentially giving away a point with each overtime losses, but the sole point attained is crucial AND can be the difference between a May playoff visit or a May tee time. 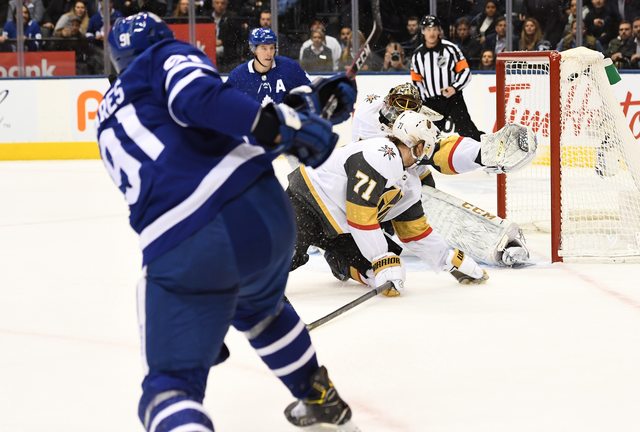 Subban nearly made another highlight save on this OT winner (USA Today Sports)
For what it’s worth, Subban has given his team a chance to win in both of his completed starts this season. In his first game of the year, he was pulled during the first intermission, due to an undisclosed lower-body injury. Upon his return, Subban has been sharp, yet the team has failed to secure their netminder a win. Over the past three seasons, Subban has been saddled with a mediocre 21-15-5 record, certainly an underachievement for a team finishing as high in the standings as the Golden Knights. His 2.86 GAA and .905 Sv% over his 41 starts are just fine for a backup, especially one as young and inexperienced as he.

Fortunately, getting Subban more game action seems to be the plan for the season. In years past, Fleury was ridden far too hard, eventually suffering an injury and missing significant time. This go around, Subban incurred the first injury, after surprisingly getting the call to start the fourth game of the season in Arizona. Now healthy, Subban has resumed his more-than-adequate on-ice play while still being saddled with losses.

”Malcolm was excellent….he made some great saves, it was great goaltending.”
- Head Coach Gerard Gallant following the loss to Toronto

For whatever reason, this team does not win enough games with Subban in goal. Should Subban continue to see a steady stream of starts?
Yes.
Does the team need to perform better when he is in goal?
Also, yes.

Unlike last year, these issues haven’t been isolated to Subban’s starts. Night after night, Fleury has been called upon to make the same caliber saves Subban has grown accustomed to. Fleury was toasted and subsequently pulled in a brutal 6-1 home loss, at the hands of the Mikko Rantanen-less Colorado Avalanche. Following that game, Gallant minced no words in his critique of the team.

”I pulled him (Fleury) to save him. It was embarrassing the way that we played. I think they had 30 shots at that time, halfway through the hockey game.”

All in all, team defense needs to be better. It has been a big enough issue that Deryk Engelland has even served as a healthy scratch in multiple games, something we never thought to be possible. There is trouble in paradise and while there are multiple symptoms of the Golden Knights’ struggles, the team simply needs to be better in front of their netminders. With Subban slated to receive more starts than ever before, the team needs to tighten up. Starting their 26-year-old netminder, with minimal game time in the NHL, is a risky play if this team wants to regain and finish the season with a playoff spot.

Until then: It’s not easy, to be, Subby.

Here’s the inspiration for the article, in case you didn’t know what in the world I was quoting.
Give it a listen, with your eyes closed, imagining you’re Malcolm Subban:

Be sure to follow me over on the Twitter for up-to-date news, analysis, and live discussion during games. Below you'll find the links for all of my exciting VGK content!