Wanna blog? Start your own hockey blog with My HockeyBuzz. Register for free today!
The next player I would like to make a case for to enter the Hockey Hall of Fame is Alexander Mogilny. Unlike the first two players, Mogilny cannot be defined as part of any one team throughout his career having played six seasons with the Sabres, and three each with the Canucks, Maple Leafs, and Devils. However, before I can talk about his NHL career let me first look at his time in Russia.

As a teenage player, Mogilny was considered one of the USSR’s future stars playing on a line with CSKA Moscow with Pavel Bure and Sergei Fedorov. During this time he helped the USSR win Gold in the World Juniors and World Championship in 1989, Olympic Gold in 1988, and a silver medal at the World Juniors in 1988.

While his play during this time period was excellent, what makes this period of his career special is what happened away from the ice. In 1989, Alex Mogilny was considered to be the first Soviet player to defect to the NHL. After the Russian team was awarded a two day shopping break in Stockholm, Sweden, Mogilny slipped away with Sabres management Don Luce and GM Gerry Meehan.

This is huge event for the history of hockey because it opened up the doors for other players from the then Soviet Union to come to the NHL.

Upon arriving in Buffalo, Mogilny chose the number 89 as tribute to the year he defected and the place he was drafted in. In the 1992 season, Mogilny tied Winnipeg Jet rookie Teemu Selänne with 76 goals where both players became the first European players to achieve that many in an NHL season. Due to Pat Lafontaine’s injuries in the mid-90s, Alex Mogilny was named interim captain of the Sabres, becoming the first European captain in NHL history.

In 1995, Mogilny and a 5th round pick (Todd Norman) were traded to Vancouver for Mike Peca, Mike Wilson, and a 1st round pick (Jay McKee). In hindsight the deal appears to have been a good for both teams, however it was viewed as a loss by Vancouver fans due to the success of the Canucks after 1994. In Mogilny’s first couple of years in Vancouver he was a force on the team. His first year he had 55 goals and 52 assists for 107 points, and then the next year he led the team with 31 goals and 42 assists. However after Pavel Bure left the squad, the Canucks had problems finding players with chemistry with Mogilny which led to his production to drop. Late in the 1999-2000 season Mogilny was traded to the New Jersey Devils where he won his only Stanley Cup that spring.

After a renaissance season with New Jersey in 2000-01, he found himself with 43 goals and 40 assists with the Devils leading them to a second consecutive Stanley Cup finals. They lost to Raymond Bourque’s Colorado Avalanche, however, and Mogilny became a free agent for the first time in his career. He ended up signing in Toronto where he became the only player outside of Mats Sundin to lead the team in scoring in eight seasons helping the Leafs get to a conference final in 2002 losing to the Carolina Hurricanes. After the 2005 Lockout, Mogilny ended his career in New Jersey where he was unceremoniously sent down to the Albany River Rats of the AHL. 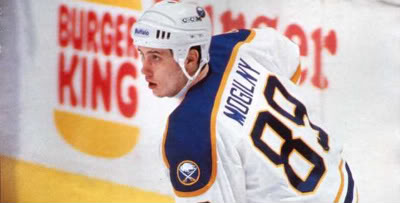 The Original Alexander the Great

Mogilny is one of those players who is hard to compare to others. On the ice, his 1,032 NHL points puts him ahead of the likes of Pat LaFontaine, while his 473 goals ties him with Denis Savard, and ahead of LaFontaine, Doug Gilmour, and Pavel Bure. What puts him over the top are his trailblazing exploits to help change the game of hockey. He led the way for European players to get into and be respected in the NHL. He took a big risk of his own safety in Russia in order to pursue his dream of an NHL career.

The official criteria for a player to get into the Hockey Hall of Fame states the player’s attributes will be based on “Playing ability, sportsmanship, character and their contribution to the team or teams and to the game of hockey in general.” Looking at each one of those factors, Alex Mogilny fits all the requirements.

Feel free to give me any suggestions as to who I should focus on next in the comments or through:
Email- [email protected]
Twitter: @Kirshenblatt