Wanna blog? Start your own hockey blog with My HockeyBuzz. Register for free today!
The Penguins are officially locked into the 21st pick in the 2019 Entry Draft this June. It’s not a great location for a team in need of immediate help.. There is not great value at 21. Pittsburgh will have to get lucky to get a player who can provide a significant impact at the NHL level. It’s about a 55% proposition the player drafted eventually plays in 100 NHL games 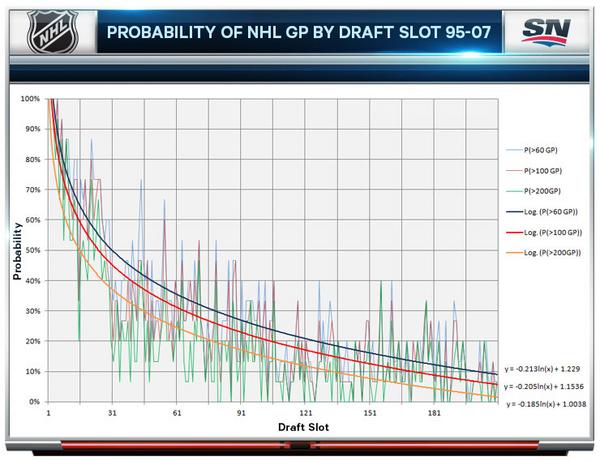 This is problematic for any team regardless of where they are in the standings. It is really problematic for a team in the declining years of their win now journey. Pittsburgh would need to get incredibly lucky for the player at 21 to provide a positive impact while the team is still a venerable Stanley Cup contender.

Don’t take my word for it. Look at the 21st overall selections since the 2000 Entry Draft

Tuukka Rask is awesome, but even he was traded and took time to make an impact. The rest of the players are underwhelming and that is after waiting for them to develop enough to play in the NHL at all.

Does using the 21st pick automatically mean the Penguins will be getting an average at best player who won't make their NHL debut for a few years? No. Are the odds very likely in favor of that? Yes.

I think the best use of the Penguins 21st overall selection would be to package it with another player and try to boost up the value and acquire a current NHL player who can make an impact. One example could be to package #21 overall with Olli Maatta and see what you can get. Bryan Rust could be another player where adding a first round pick to a trade you might get something really useful back.

Another route the team could take is using the first round pick in a package to trade away negative value. When I look at the track record of 21st overall selections and then I look at the catastrophic impact Jack Johnson has had on the Penguins it might not be a terrible idea to use the first round pick to get rid of his dead weight. Sure, it sucks to waste a first round pick on fixing a self-inflicted error, but getting rid of a player who actively makes your team worse provides better value to a win now team than using the pick and waiting a few years on mediocrity. Unloading Patric Hornqvist's contract could also fall along this line of thought.

Of the two options I think packaging the pick with a player and increasing trade value is the likelier and probably the more prudent approach. The Penguins aren’t going to bail on their Jack Johnson experiment yet and they are definitely not going to use a first round pick to admit that mistake after one year. I do favor this option to actually using the draft pick and making a selection.

All in all 21st overall is a pretty crumby place to be in a year without a playoff victory.

Join the Discussion: » 187 Comments » Post New Comment
More from Ryan Wilson
» Evgeni Malkin led league in 5v5 points per 60. Do the Penguins know why?
» Penguins lose another player for year + Solving draft and playoff format
» Pittsburgh could be a hub city and win draft lottery
» Are the Penguins getting screwed? That's a hard NO
» Likely playoff format has the Penguins playing...