Wanna blog? Start your own hockey blog with My HockeyBuzz. Register for free today!
One of the Penguins who was an integral part of back to back Stanley Cups will be making his return to game action in Pittsburgh for the first time tonight. Matt Murray will be getting the start in goal this evening. He has not played in Pittsburgh since 2020. Murray, even in the best of times, was a somewhat polarizing player due to the fact he won the starting job from Marc-Andre Fleury and some fans couldn't handle it. You know you are in a no-win situation when you put up insanely good numbers in back to back Cup wins and people still go out of their way to be negative.

Just as a refresher Matt Murray played in 199 games with the Penguins in the regular season and posted a .914 all-situations save percentage. There were ups and downs involved, but for the most part you got very solid NHL goaltending. It was the two Cup runs where he really shined. He played 1,575 minutes at 5v5 during 2016 and 17 in the playoffs posting a .934 5v5 save percentage and an .834 5v5 HDSV%. Both terrific numbers. In all-situations he was a .928 goalie and had a .840 HDSV%. He closed out the 2017 Stanley Cup Final posting back to back shutouts. Something I don't think has gotten enough credit as it should have. The 2017 Penguins weren’t a well-oiled machine like the the 2016 version. They needed their goalie to post the numbers he did. They got the numbers they needed from Murray (and Fleury in earlier rounds). It was a stud performance in back to back seasons. It ranks up there as one of the best back to back playoff performances by a goaltender.

This would be the high point for basically any NHL goalie’s career. How many goalies win back to back titles with way above average numbers? Unfortunately, for Murray he never quite sniffed this caliber of play again. Injuries have taken a toll. His play slowly got worse and worse. It got to the point where moving on from Murray was the correct call, just as it was the right call to go with him instead of Fleury. Ottawa traded for him and rewarded him monetarily for his Cup success in Pittsburgh. It didn’t go well. In the last three seasons he has only played in 48 games total. This year he has only played one game so far. His all-situations save percentage these past 48 games has been .898 with his HDSV% at .799. Far below the standard he set in Pittsburgh. 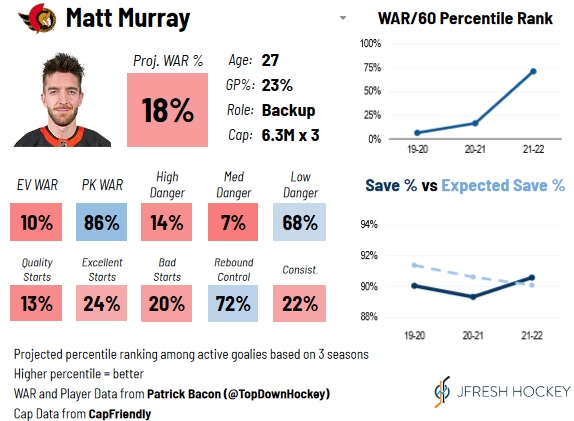 By winning back to back Cups he set high expectations for his future. He was only 21 and 22 years old during those years. Those expectations may have been a burden because it feels like the pressure of expanding upon his success has been a lot. It is tough to blame him. For a sizeable portion of the Pittsburgh fanbase, he was a villain for replacing Fleury despite his playoff success. He then went to a pretty bad Ottawa team and had the expectation of keeping them afloat. Throw in some injuries and things are pretty tough both mentally and physically. Fast forward to this year and things only got worse for Murray as far as expectations are concerned. Kyle Dubas attached his future job status to the success of his goaltenders this year putting Murray in an incredibly tough spot. Toronto isn’t exactly the place you go to avoid expectations and find your footing. Murray is a professional goaltender and this all comes with the territory. I don’t want to make excuses for him. He needs to rebound in a big way. Just saying it is Toronto and the media will eat the players who play well, let alone a struggling goalie.

Even though Murray technically returned to Pittsburgh with Ottawa, tonight will be the first game action he has seen in Pittsburgh since the 2020 playoffs. I feel like he should get a hero’s welcome for the occasion. Those impressive banners from 2016 and 2017 aren’t there without him. Plus, it would be a really great thing to do for him on the human side of things. He deserves it.