Wanna blog? Start your own hockey blog with My HockeyBuzz. Register for free today!
The Pittsburgh Penguins have failed to make it out of the first round for the fourth consecutive season after falling to the Rangers 4-3 in overtime. This is the fifth series in a row they have failed to win. Their last playoff series win came over the Flyers in 2018 in round one. We very well could have seen the last game Sidney Crosby, Evgeni Malkin, and Kris Letang will play in as teammates. It’s a real bummer.

This game went a lot like the other games. The Penguins played quite well. They dominated in high-danger chances. They also were unable to hold the lead for the third consecutive game. I think it is frustrating to bow out again in the first round. I think they played well enough to move on. They had to overcome quite a bit with their injury issues and almost pulled it off. Game 7 was a microcosm of the series. Penguins playing Mike Sullivan’s system effectively while still coming up short. Here is a whole bunch of information about the series. 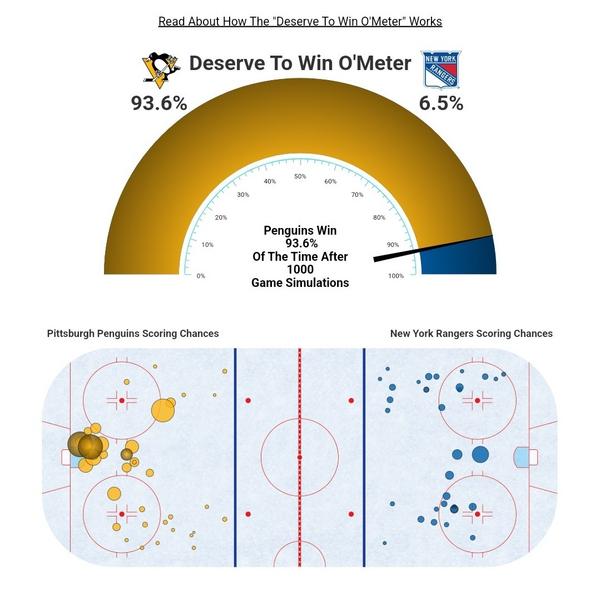 Anyone who watched this series won't be surprised by this: the Penguins ran roughshod over the Rangers at 5v5 in almost every game. Goaltending and blown leads cost them a series they should have wrapped up well before game seven. pic.twitter.com/MnN9nlzyMY

This was also the highest xGF% the Penguins have ever recorded in a playoff series, surpassing their 62.2% against Tampa Bay in 2016.

A bludgeoning at 5v5, but Shesterkin dramatically better than the motley crew of Penguins goaltenders; just enough to drag the Rangers over the line. pic.twitter.com/4DPGw5QfwF

Penguins are out despite Crosby line doing this.😲 pic.twitter.com/XD7goMfs7T

Igor Shesterkin recorded 255 saves in seven games, the most in a single series by a Rangers goaltender (since 1955-56 when the NHL began officially tracking shots on goal).

I’m going to start with some big picture stuff and then some Game 7 specific thoughts.

As mentioned, Sidney Crosby, Evgeni Malkin, and Kris Letang are not guaranteed to all be back. I think the #1 priority of this offseason should be to make sure that they are. There are two wildcards at play here. One is Kris Letang and what he wants to do. The other is who will be calling the shots. Ron Hextall and Brian Burke are not hires from the Fenway Sports Group. A Fenway Sports Group that just paid close to a billion dollars for a hockey team. This is an enormous offseason for the franchise and the direction they are going to take. If I bought a team I would want my own people shaping the future path of my organization.

As for Kris Letang he wants to be paid. He was underpaid for a very long time and he can see all the other defense contracts out there. Pay him. Give him his ~8M or whatever with the term if you have to. Who cares? You are nowhere without him, absolutely nowhere. He is a fitness freak. He has a better chance of beating the aging curve than the majority of players. He needs to be priority #1. There's no replacement for him.

People say they want a rebuild, but it isn’t as simple as hitting a rebuild button and having things work. You can go that route and mess up because relying on the draft is a crap shoot. I would rather keep the band together and let its natural path play out. The Penguins will never have a group like this again. I'm fine with a nostalgia act, but I also think this team showed it can still play quite well.

I am 99% sure Malkin will be back and he should. He has publicly stated he will take a pay cut. He is still a great player. I haven’t even given his situation much thought because I think it is a foregone conclusion.

I would offer Bryan Rust a 6x6 contract to see if he wants to keep all of his stuff in PIttsburgh and not deal with moving. He has every right to max out his deal. I think a contract of this value would make him really think about staying.

There are some mid-tier contracts that have to go to make things feasible moving forward. Brian Dumoulin, Kasperi Kapanen, and Brock McGinn do not give you proper value. You cannot have dead weight in the mid-tier range. I would add Jeff Carter to the list here, but I don’t think it is as realistic to dump his contract as it is the other three here. I believe they rewrote the language on over 35 contracts and because Carter’s contract is not front-loaded he could potentially retire and come off the books.

Dumoulin is washed and even if he isn’t there is not 4M of value anymore.

Kasperi Kapanen is a pending RFA. I wouldn’t even give him a qualifying offer. I want nothing to do with him. He stinks. I still can’t believe the organization spent two first round picks on him

Brock McGinn’s signing didn’t make sense on day one and it surely doesn’t look good after last night’s debacle. You can’t give fourth line players money and term. You really shouldn’t do either, but you absolutely cannot do both. Getting out from under Brandon Tanev’s contract only to shuffle that cap space to a player who isn’t going to make significant positive impacts is a self-inflicted error. There’s always going to be players to fill his role very cheap. Drew O’Connor is sitting right there.

I think you can add Jason Zucker’s name to this list. I think he had a rather unfortunate year with the injuries. He played really well, but he just wasn’t available enough and when he was the team didn’t seem interested in using him in a role that justifies the 5.5M cap hit. He has one year left on his deal. I’m sure the Penguins could find a taker for him if they wanted to be aggressive about it. Nice player and all, but there’s only so much money to go around and you have to cut from somewhere.

One of the big issues of paying to keep the band together is going to be finding cheap depth. I thought the Penguins did a real nice job with the Danton Heinen signing. He did a nice job for the team. By doing so he also earned a raise, but not from the Penguins.


Most teams have six versions of Danton Heinen making anywhere from $1.75 to $5.5 mil.

The Penguins are going to have to keep finding players who fall through the cracks like Heinen did. You won’t always hit like they did with Heinen, though. The opportunities are there every year. You have to do your homework and have a little luck.

I would love to keep Rickard Rakell. I really liked how he played. A lot of this hinges on the Bryan Rust situation and how things play out with the core group of players. How aggressive will they be in shedding some of the dead weight in the mid-tier contract range?

The Penguins could use some goaltending depth, clearly. If you wanted to keep the core together I wonder if a former Penguins starting goaltender would be willing to play back in Pittsburgh for ~1M. Might be an ice carrot to dangle in front of Kris Letang in an effort to keep him.

It is only day one of the offseason. There will be plenty of time to dive more into detail about these topics.


Here are some of my thoughts on Game 7

I agree with Mike Sullivan the helmet rule stinks. It also didn’t cause John Marino to turn the puck over like that. Marino was playing the best hockey of his career, but you can’t do what he did there. From my understanding Marcus Pettersson could pick up his helmet and put it back on, but he shouldn’t have to in the first place. There is a rule in place which states a roughing call can be assessed if an opposing player purposely takes another player’s helmet off. By the book it is a pretty clear penalty. The league doesn’t ever use their own book so there’s that.

Jake Guentzel’s goal was amazing. It deserved better than to be an afterthought in a Game 7 loss. He is so immensely talented and creative. He is a real special player

Jake Guentzel kicks the puck up from his skate, bats it into the net. A goal was called on the ice, but now it's under review. pic.twitter.com/6Tzcm8ylUz

Jake Guentzel scored eight times in this series. He is the current leader in playoff scoring. The same guy people wanted to trade because he “can’t” score in the playoffs.

I thought Tristan Jarry was noticeable in a good way. Just the way he moves and challenges looked like less of a struggle even though he was clearly still laboring through his injury. He was fully wrapped in ice around the ankle/foot area in the post game press conference. I’m close to 100% certain the Penguins move on to the second round with him in net all series.

Evgeni Malkin had a quiet game after having two decent ones. I don’t know why Mike Sullivan felt the need to marry Kasper Kapanen to him. Jason Zucker had a pulse and instead of tapping into it Sullivan attached Zucker to Carter and Kapanen to Malkin neutering two lines instead of one. Having Rakell back was really nice and I think they were missing a third player on their line capable of contributing. I didn’t like having Kapanen there at all.

Bryan Rust looked hurt. He had no juice in his stride. There is a high chance he has played his last games as a Penguin. I wish he went out on healthy terms. He has been fantastic the past few years. He didn’t look like himself out there.

When the #1 power play unit isn’t shooting from up top they become predictable and perimeter bound. The personnel on the power play are all great players. I don’t know why they continue to fall into this trap. A lot of this specific criticism falls on Letang. He is so good at walking the blue line. I don’t know why he doesn’t pull the trigger more often. Especially, with players like SIdney Crosby and Jake Guentzel down low with their eye-hand coordination.

Evan Rodrigues was a big part of why the Penguins stayed in a comfortable spot in the standings early in the year while they had injury issues. He dramatically cooled off as the year went on. His shorthanded goal was a throwback to earlier in the year when he was close to unstoppable.

Most teams have six versions of Danton Heinen making anywhere from $1.75 to $5.5 mil.

Rodrigues intercepts the puck from Chytil just as the #NYR power play expires to go ahead 3-2 pic.twitter.com/exJwbwHbmk

Rodrigues is a pending UFA

Mika Zibanejad scored the huge third period goal to tie the game late for the Rangers. He also gave the blue print on how to get off the ice when you lose a skate blade. I give him an A+ here. You can’t do any better than this

Getting back to the bench without a skate blade is a skill. #StanleyCup

So that’s pretty much it for the 2021-22 season and concludes year nine of covering the team for me. We’ll have plenty to talk about this summer in what should be a franchise defining offseason for the Pittsburgh Penguins.

Join the Discussion: » 205 Comments » Post New Comment
More from Ryan Wilson
» The Penguins and finding the next Nichushkin
» Penguins need to be looking in all places for scoring depth
» News from around the league
» Replacing Evgeni Malkin with a former Crosby linemate
» Penguins top priority right now is...