Wanna blog? Start your own hockey blog with My HockeyBuzz. Register for free today!
The Penguins played another solid game last night, but this time took a 6-3 loss to the Montreal Canadiens. It would be disingenuous to be overly critical just because they lost to a struggling Canadiens team. The Penguins put up 50 shots in the game and had an xGF% of 66.13 at 5v5. Sidney Crosby had his first three-point game of the season. Evan Rodrigues scored yet another goal and still leads the league in xGF%. They scored three times even with the opposing goalie going .940. So what’s the deal?

The same thing it has been every time Tristan Jarry has not started this year. Casey Desmith just isn’t bringing the goods. DeSmith did finally crack .900 for the first time in four starts this year, but it was only .903. The Canadiens are only one of six teams in the league who have failed to average two goals per game at 5v5. They scored three times and it was only the fourth time all year they managed to do so in 23 games.

DeSmith only has a four-game sample (.867) and overreacting to goaltenders in a four-game sample can be a recipe for looking bad. Although, something has to give. DeSmith has been coddled this season as Jarry has put on a cape to carry the goaltending load this entire season. DeSmith was given a home start against one of the feebler offenses in the league and didn’t get the job done, again. DeSmith isn’t making things easy on Ron Hextall because at some point he is going to have to make a decision on the backup role. On one hand if DeSmith was healthy the Penguins would have probably would have beaten the New York Islanders in the playoffs last year. DeSmith had a .916 save percentage through his first 70 games of his career. Not a huge sample, but a decent enough showing.

On the other hand 70 games is no true indicator of who he is as a goalie, either. The Penguins are literally avoiding playing him this year and running the risk of overworking their #1 goaltender who is having a tremendous season as a result.

Being on this list with such a small sample is quite the feat, and not in a good way 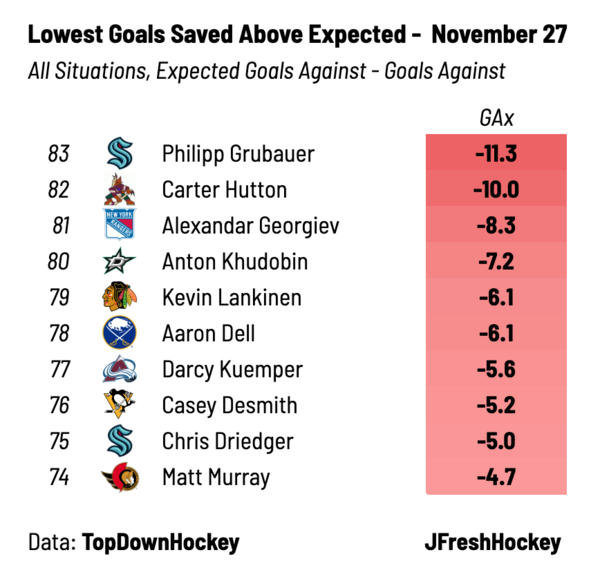 The Penguins are going to have to make a decision soon. Either keep running out Casey DeSmith regardless of his play in order to rest Jarry, find somebody else in the short term ie Louis Domingue, or go outside of the organization for an upgrade. I think Filip Lindberg will eventually be an option long term, but at the moment he only has 7 AHL games (.915) to his name and is currently week to week with a lower body injury.

Tristan Jarry has done everything humanly possible to bounce back from the playoff shame from last year. He needs a break. The Penguins have to figure out a way to give it to him.