Wanna blog? Start your own hockey blog with My HockeyBuzz. Register for free today!
It was only a matter of time. No, not that this Penguins team missing a huge chunk of its better players losing a game outright. The Tampa Bay Lightning finally earned a lead in regulation after 18 periods failing to do so! The defending champs avenged their opening night drubbing by the Penguins and returned the favor with a 5-1 victory.

With Halloween around the corner the Penguins turned back into a pumpkin, at least for one night. Truth be told the Penguins didn’t play 5-1 bad. They split the shot attempts 40-40 with Tampa and had a 50.63 xGF%. They gave up two empty-net goals. It is just the way it goes sometimes. There was a sequence early on in the game where Brock McGinn scored what looked to be like a good goal, but the referee lost sight of the puck and blew things down early. What would the rest of the game have looked like? We’ll never know, but the Penguins were only able to muster up a single goal after it so I’m not so sure the overall result would have been different.

Andrei Vasilievskiy looked the part last night. He was in his Vezina form and the Penguins were only able to push a single puck by him legally and it wasn’t until the very end of the game when things were already out of hand.

I think most people would take only one regulation loss through six games even if the Penguins were at full health. To do it with the cast of players they’ve had has been impressive. They’ll need to have a short memory and get back to work doing the things which have led to this surprising start. They’ll be getting back to work Thursday against the Flames. Will Sidney Crosby be back for that game? Rumor has it Troy Crosby was at the game last night… so maybe?

One player who hasn’t quite stepped up so far this year is Kasperi Kapanen. He has zero goals through the first six games of the season. His value is the goal scoring. When he isn’t scoring historically speaking he isn’t doing much else 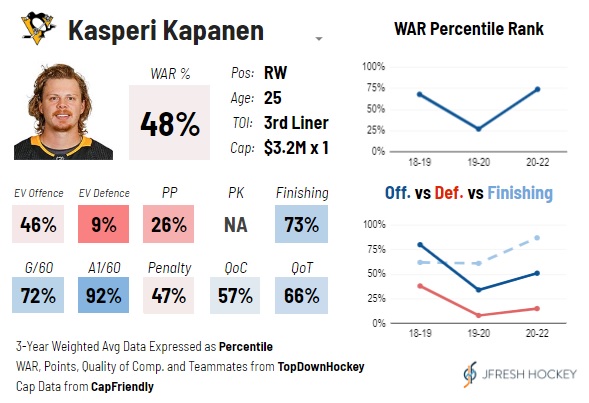 These numbers are updated from last year. His offensive impact has improved, but when you think about Kasperi Kapanen you would think he could drive more offense, but he relies a lot on his shooting. He also relies a lot on the rush. When he’s not shooting 16.2% things can look kind of meh. He would benefit quite a bit from getting one of the Penguins top three centers back, preferably Crosby or Malkin.

All that said, perhaps things won’t be so bad once his shooting percentage regresses back from the 0% it is now. His CF% is 58.27 and his xGF% is 55.77. Small sample of course, but it would be encouraging to see him improving in the non-shooting areas of his game. He’s a decent shooter as he is 11.4% in his career. The no goals through six games is annoying, but I’m more interested in those underlying numbers moving forward. The shooting will come around.