Wanna blog? Start your own hockey blog with My HockeyBuzz. Register for free today!
Ron Hextall has been true to his word so far. The Penguins weren’t going to go after big fish in free agency.

Hextall on the cleared cap space: "We can visit the free agent market, but I don't suspect there will be a top player available that we can fit under the cap. We're going to do everything we can to put the best team on the ice, whether it's internal or external."

Instead, the Penguins are spending a little bit here and a little bit there. None of it to this point will do anything to move the Penguins in the direction they need to go in. At best they will stay the same, but it is likelier they are worse than they were last year. This is a team that is 3-11 in their last 14 playoff games with three consecutive first round losses.

I’d love to say something positive about this team, but I can only talk about the moves they put in front of me. Things haven’t been great for a while. Any steps forwards are always negated by taking steps back. Sometimes more steps backwards than forwards. Hextall claimed he needed to move Jared McCann for cap space. Well, one of their new signings makes basically the same amount of money as Jared McCann. 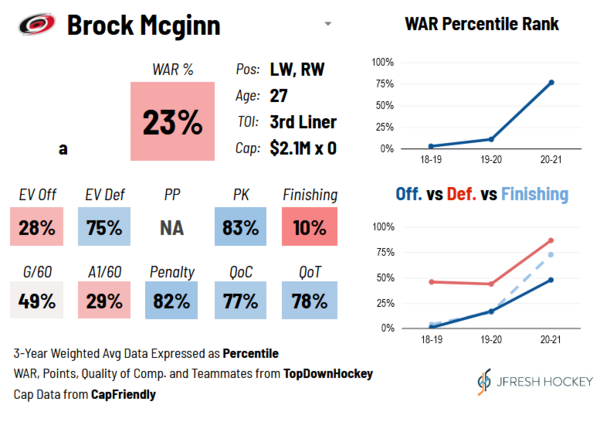 The Penguins got lucky and got out of the Brandon Tanev contract only to immediately hand out a slightly less bad deal to McGinn. Brock McGinn not only got 2.75M, but also a four year term. Don’t give these kinds of players money and term. At worst do one or the other. You can’t do both. The Penguins are not in a position to be paying a premium for fourth line players. They need difference makers in the top nine and smart frugal signings on the edges of the roster.

If you want to argue McGinn isn’t a fourth line player you can, but then you are playing an offensively devoid player on the third line and to me that is a huge tactical mistake. If the allure is his PK ability my opinion on this hasn’t changed. Do not pay a premium for penalty killers. McGinn isn’t a bad player, but taking into consideration what the Penguins needs are and the amount of capital they have to spend this is signing is just aimless and uninspired. McGinn’s 2.9M cap is not insignificant. It should have been used more wisely. It had to be used more wisely.

With McGinn signed it is no guarantee Zach Aston-Reese will be back. Aston-Reese is arbitration eligible and he will likely get a raise and it will likely be in the 1.5-2.2M range I don’t see why the Penguins couldn’t just do that and pass on McGinn.

There were other depth moves. The Penguins are bringing back Evan Rodrigues for one-year at 1M. Sure, fine, whatever. The term and cost are appropriate for the role he will play. 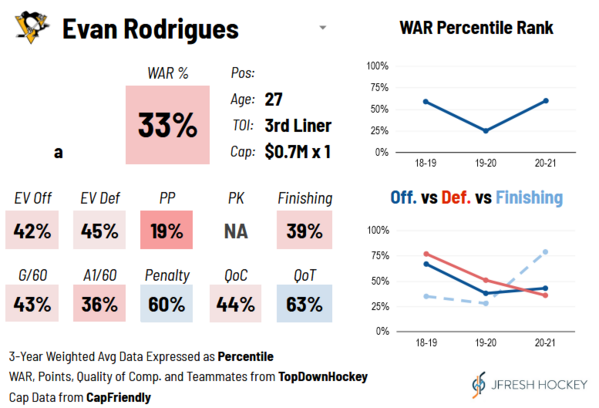 However, Freddy Gaudreau signed with Minnesota for two years at 1.2M each year. I would have gone with Gaudreau 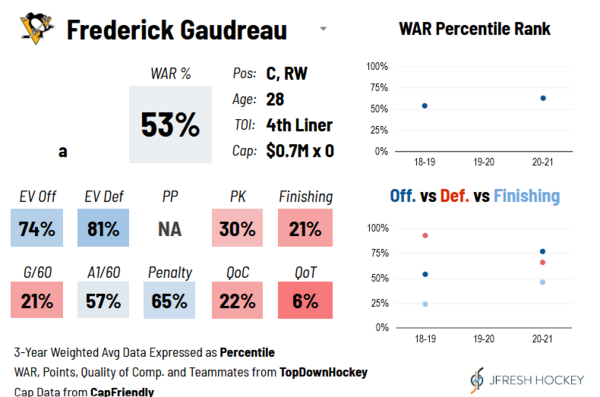 The Gaudreau vs Rodrigues decision is far down the list of issues for this team so I’m not going to pretend like it matters that much just that I would have gone with Gaudreau.

The Penguins did make another signing that is sure to get a reaction. Dominik Simon is returning. This signing is fine because it is a two-way deal. He can be buried in the AHL and he passed through waivers last year. Speaking of last year he only played in 11 games and had zero points. I have no problems with having cheap depth players with the flexibility to put them in the AHL.

As it stands the Penguins have done the following

For a team that needed to take legitimate steps forward this has been at best a lateral offseason. I think they are definitely worse.

The offseason isn’t over, but the options shrink by the minute.