Wanna blog? Start your own hockey blog with My HockeyBuzz. Register for free today!
I’m not doing a crazy deep dive today, but I did want to use a new data visual to give some appreciation to Kris Letang for all the heavy lifting he has done over the years. He compares favorably with many of his contemporaries. Some of whom he consistently gets passed over by Team Canada and in general perception.

These are ten year samples of xWAR per 82 game seasons.

It makes it easy to see the ups and downs throughout a decade. Who was better in their primes and who has continued to perform well into their thirties. I think as you’ll see Kris Letang is amazing and still doesn’t get the due he deserves. I tried to use players in the 30-33 year old range, but there are exceptions and I note them.

Karlsson is one of the best players of his generation and Letang holds his own. I'm not here to say Letang is better than Karlsson, but this is as close as the comparisons will get. Both players have had their share of injuries to navigate. Karlsson is only 30 and he has a few years to go to get to Letang's 33 and still maintain a high level of play. No sure thing at the present moment. 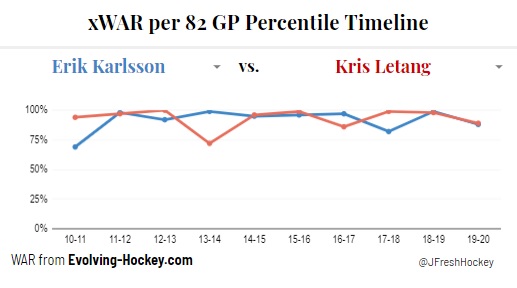 Drew Doughty has been propped up by the Canadian media as a megastar for the majority of his career. That isn’t to say he wasn’t a great player, he was. However, he is nowhere close to the player they think he was the past few years. Doughty was gifted a Norris Trophy on his media reputation and not his actual performance. He continues to be talked about as a top pairing defenseman. In reality he has one of the worst contracts in the league at the moment and his career is off the tracks at the moment. When you look at Letang’s performance up with Doughty’s it makes you wonder why one was a top pairing staple and one couldn’t even make the Canadian Olympic teams. 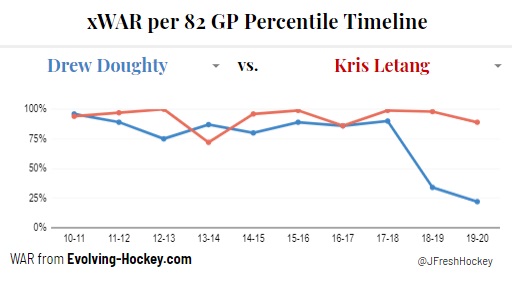 Subban has been a very good player for a long time, as has Letang. In 2012-13 they were neck and neck in the Norris Trophy and it went to Subban. I still think Letang deserved that award, but as you’ll see Letang hasn’t really been given the same respect a lot of these players have despite performing as well or outperforming these big name players. You can also see Subban, like Doughty, hasn’t aged as gracefully as Letang. 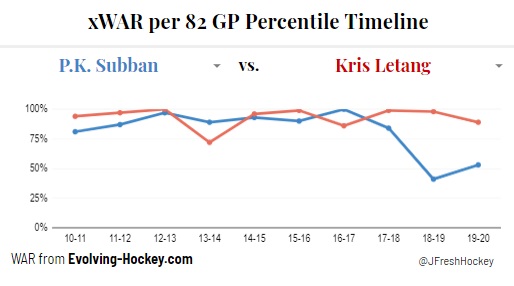 Burns is a dynamic and unique player. As you can see his chart doesn’t look like anybody else’s because that gap is due to him playing forward. He has been dynamic offensively and has been one of the most popular and praised defenseman in recent memory. Once again, Kris Letang right there with him. 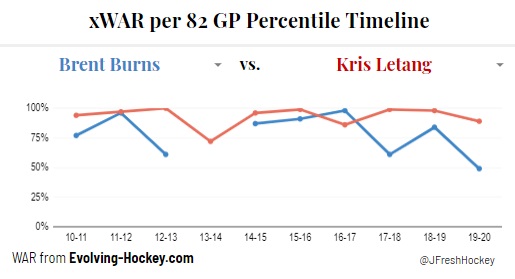 Roman Josi has put together some great seasons, namely 2019-20 where he took home the Norris Trophy. He hasn’t been as consistent as Letang over the course of his career. 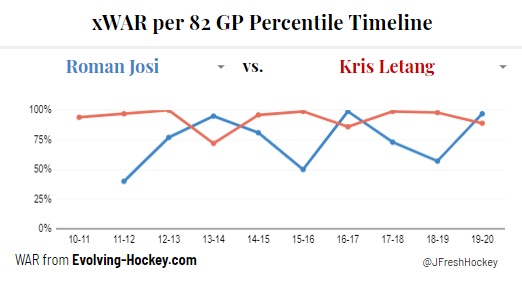 One of the marquee top pairing right-handed defenders of this era. He was one of the most sought after players in free agency this season. He was a captain of a Stanley Cup winning team. He also finds himself below Kris Letang more seasons than not. 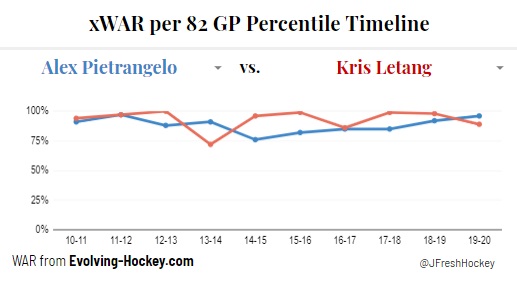 Carlson is one of the best power play quarterbacks in the league in my opinion. His role up top and how he executes it is one of the biggest reasons Alex Ovehckin STILL gets open on that left circle. He has gotten a lot of Norris buzz the last few seasons. Kris Letang has not… 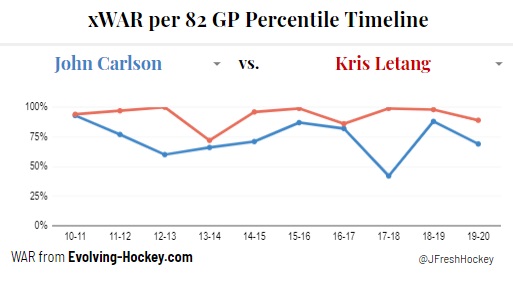 Another right-handed mainstay and leader on Team Canada. Another player Kris Letang is every bit as good as, but never treated as such. Weber is 35 years old and two years older than Letang. 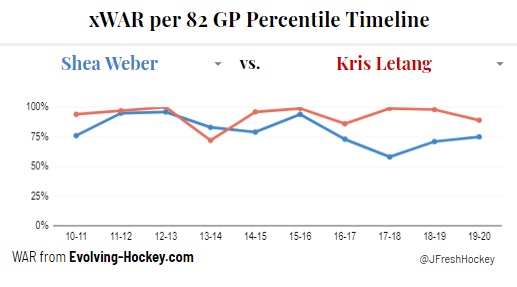 Seabrook more than any other player listed here benefited from quality of teammate and the success his team had. Duncan Keith carried him for years as we see. This is the most obvious example of the bias against Kris Letang. As far as Team Canada goes Letang was unlucky that in 2014 Seabrook strung together one of his few good seasons. Combined with the face the Blackhawks were coming off of a Cup win while the Penguins were barreling down the end of the Shero era and Letang never had a chance. Even if Letang should have won the Norris the year prior it didn’t and wasn't going to resonate. Seabrook is 35 now and is one of those classic Blackhawk cap circumventions they’ve been known to do. He has completely fallen off a cliff while Letang continues to perform into his thirties. 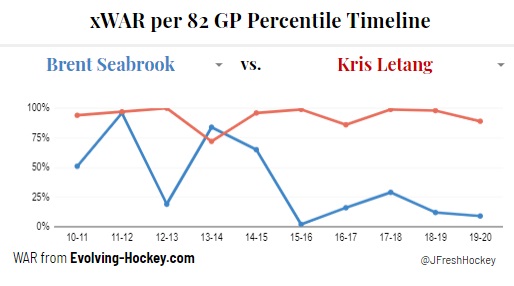 He has been treated like hockey royalty by the media and he has been great. He is four years older so the drop off is understandable and the chart isn’t as good of a comparison as the other players previously listed. I just wanted to show Letang held his own with Keith when you compare the years they were the same age. 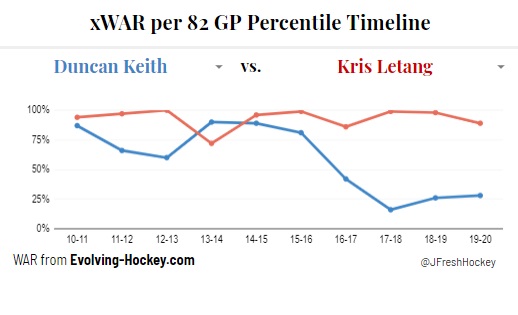 Hedman is 29 and the youngest player on this chart. He has been one of the most consistently great players at his position and has wildly exceeded his #2 overall draft position. He is the reigning Conn Smythe Trophy winner and deserves all the praise he receives. He is elite. Kris Letang compares quite favorably! 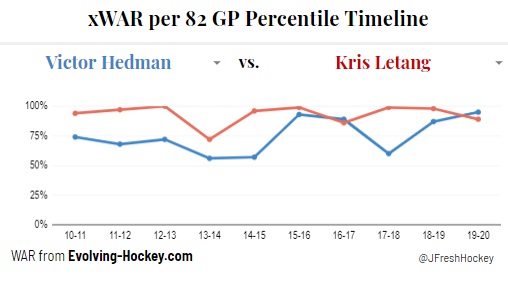 Last on the list I have Giordano. He is a few years older than Letang, but is the only Norris Trophy winner I hadn’t included from this sample yet so I didn’t want to leave him out. Another favorable comparison to Letang 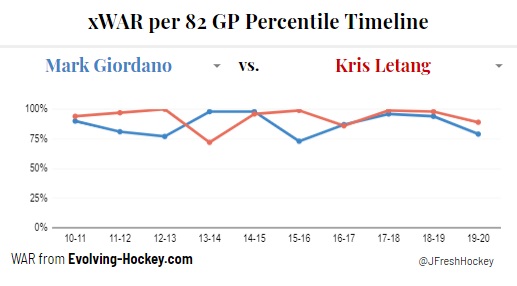 He doesn’t get nearly the respect he deserves when compared to many mentioned here today.

Kris Letang is elite. Put some respect on his name.