Wanna blog? Start your own hockey blog with My HockeyBuzz. Register for free today!
Give me a Follow @SMaloughney
Jesse Puljujarvi is essentially coming into the Oilers this season as a brand new addition. I say this because the now 22 year old winger played his last game in an Oilers uniform February 15th at the age of 20. Listening to Puljujarvi speak now it is clear he has grown up and not only because his English is far better. The young Swede has matured and both he and the organization have moved past their mistakes and are ready to start fresh.

Frankly, I'm sick of rehashing the Puljujarvi saga that has brought us to this point but let's go over a few details in point form fast.

To sum it up in a sentence; the organization had no clue how to develop Jesse Puljujarvi, rushed him then benched him and the player grew frustrated and said he had had enough.

I find coming up with realistic expectations for Jesse Puljujarvi difficult because every fiber of my being honestly believes he can be a 25+ goal scorer in a top six role but instead I will take a step back and set the bar a bit lower.

Puljujärvi is a big winger who combines size, skating and skill. A strong skater who can blast past the opposition in full speed. Able to use his size, reach and stickhandling skills to retain the puck in speed. A smart player at both ends of the ice, both on and off the puck. Great work ethic and positive attitude. More of a playmaker than a scorer and could improve his shooting skills. Doesn't shy away from physical play, but could use his size more to his benefit.

At times this was the player that Jesse Puljujarvi showed he could be in Edmonton. His best season, where he put up 12 goals in 17/18, he spent 256 minutes with Connor McDavid. Together the duo posts a 54.61CF%, a 61.90GF% and an xGF% of 59.79. The following year Puljujarvi played a mere 66 minutes with McDavid.

This isn't to say Puljujarvi should immediately start and stay with McDavid but in 18/19 where Jesse posted only 4 goals in 46 games his most common linemate was Jujhar Khaira. I don't think it's unreasonable to suggest Puljujarvi needs more skilled linemates to produce.

I went through and watched all 24 goals that Puljujarvi scored for Karpat during the 19/20 season and then made a map of where he scored from. 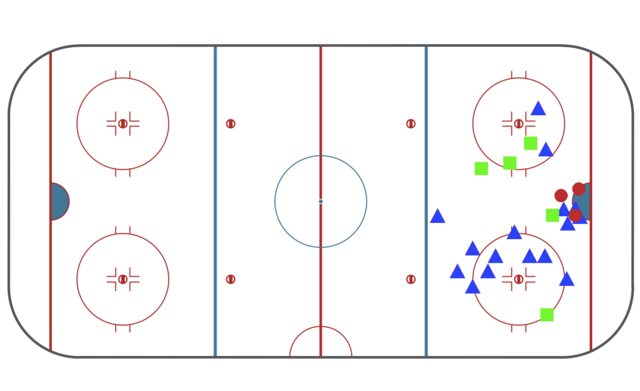 Looking through his goals, Puljuajrvi clearly likes to fire his wrist shot from the right circle and watching his goals it's clear to see why. Puljujarvi has a deadly quick release and I was surprised to see even through traffic, Puljujarvi's shot would not hit a single person. His accuracy is bordering on elite.

One area that fans always were wanting more from Puljujarvi was his one timer. Earlier this season, Puljujarvi fired a shot that was clocked at 136.1km/h. His accuracy is not always there but the sheer velocity he can produce is terrifying for defenders.

Puljujarvi certainly can be categorized though as a perimeter player. He has scored some from the tough areas but overall he is at his best when he can wheel and deal at the circles, something he will have a bit less time to do in the NHL and was an issue before.

So where does Puljujarvi play next season? Right now I have Puljujarvi pegged as the third line right winger, paired with Kyle Turris and likely Tyler Ennis. Turris is a steady puck mover and playmaker and can find players in traffic while Ennis goes to the tough areas more and is an effective puck retrieval player. Some consistency in linemates and starting Jesse here seems like the safest bet.

Kailer Yamamoto is a lock for the right side in the top six but after that the doors are wide open. Kassian likely gets the early bump with McDavid but if he continues to show like he did in the playoffs (ie not at all) than there could be a spot ripe for the taking for Puljujarvi.