Wanna blog? Start your own hockey blog with My HockeyBuzz. Register for free today!
Through two games the general feel I have for the series is that the Penguins are better than the Canadiens and have nullified Montreal’s regular season xGF% advantage. Also, Carey Price is on his game and making things very difficult for the Penguins to cash in on their xGF% advantage. Pittsburgh is of course aiding Price with their anemic power play which has cost them a 2-0 series lead.

Heading into Game 3 I think the Penguins need to stay the course with everything except the power play. Here is how things have unfolded so far 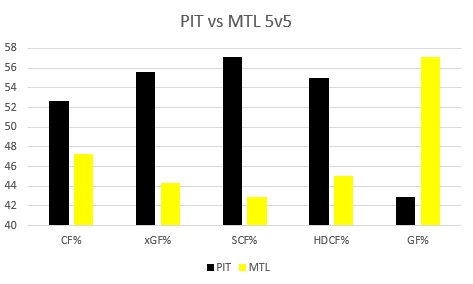 We all know goals are what matter. Montreal has the advantage in scoring at 5v5 so far. I don’t believe it is the result of quality play as much as it is Price playing at 94.12%. The good news for Pittsburgh is Matt Murray is at 92.59% which is more than acceptable. A below average Murray and a Carey Price at the top of his game was the most commonly stated worry for the Penguins heading into the series. So far it has been avoided with Murray’s play. Even with Price playing great his team blew a two goal lead in Game 1 and never gained traction until late in Game 2. I don’t think the Penguins are going to take their foot off the gas so any slip by Price and we may see the floodgates open up. So much of Montreal’s potential success rides on Price and even with him playing great they are in a 1-1 series.

We’ll see how Game 3 shakes out. There isn’t much else to say, but sit back and see how things play out.

We are down to 23 teams. The Rangers have been kicked out of the bubble courtesy of the Carolina Hurricanes. We may have seen the last of Henrik Lundqvist as a Ranger. His offseason will be an interesting one to track. He is still due big money and he isn’t the guy he once was and the Rangers are going to want to move on.

I don’t think the teams in the round robin want any piece of the Carolina Hurricanes. They look good and they are healthy.

James Reimer started his first playoff game last night since the famous 4-1 game against Boston in 2013. You know the one that let the Bruins off the hook and move on. The same Bruins team that swept the Penguins in the Eastern Conference Finals. Reimer was amazing in the game especially on this sequence

The @canes advanced last night, and if you missed it, THIS was one of the most incredible sequences we've seen in a long time.

And wouldn’t you know it, the game was 4-1 and things have come full circle.

Eventually when the Penguins series is over the classic handshake line is going to have a different look this year. Fist bumps will be taking over

Apparently, somebody called out McDavid for not being inspirational the other day. He responded with a goal less than 20 seconds into the game and added two more for his first ever playoff hat trick. Sports writers still haven’t learned hockey is not a sport where one player can consistently dominate and elevate a team to greatness ala Michael Jordan or other basketball greats. Stop blaming the best players for the lamest reasons ever and put the blame on the GM and the not good players for not being successful.

I hate this crosscheck to the back from Dubois.

I'm reminded of Daniel Sedin's response earlier this year when I asked about whether he got used to the constant crosschecks he took to the back throughout his career: "I mean, I had back surgery, so that's what happens." https://t.co/0HAMqum0Lv

I’m tired of the crosschecking in the NHL. Anytime there is a scrum near the boards and somebody falls to one knee or both it seems like there is a green light to crosscheck that player with impunity because there will never be a call for it. It is one of the easiest calls to make in the sport it is so blatantly obvious when it happens. It has gotten to the point where it is a shock when it doesn’t happen. It is an unnecessary part of both regular season and playoff hockey

Congrats are in order for Jim Benning. The Canucks have won their first playoff game since 2014-15 and first of the Brandon Sutter era after beating Minnesota 4-3 last night.

You win with players like Brandon Sutter. I’m not comparing him to Patrice Bergeron, but when I was in Boston, Bergeron was a great two-way player for us. Look at Jonathan Toews (in Chicago). That’s how you win in the playoffs. When we look at Brandon Sutter and all the things he brings, he’s going to be in our next wave of core players. I believe his best hockey is still ahead of him.

Sky is the limit, Jim.

I did a side by side of the Crosby goal the other night and Lemieux’s comeback goal to show the similarities next to each other. The video won’t embed so here’s the tweet with them together.

I mentioned the other night I thought Crosby's goal sequence in Game 2 looked a lot like Lemieux's goal in his comeback game from the breakout, to the curl, and the area of the ice they scored from. You can be the judge pic.twitter.com/E201k2HnLk