Wanna blog? Start your own hockey blog with My HockeyBuzz. Register for free today!
Big game for the Pittsburgh Penguins tonight. Do they give themselves room to breathe or will they lose their eighth consecutive playoff game (something that never happened in Shero/Bylsma era) with the last five being against lower seeded competition? A loss would force the Penguins to win three in a row. They haven’t won a playoff game since May 3rd of 2018.

So what needs to happen because the obvious isn’t going to happen:

"We have a lot of confidence in that pair. They're good players."

He said the first goal and OT goal were a result of over-backchecking.

No I don’t expect Mike Sullivan to say “Yeah, that pairing really sucked the other night”, but this does have that Craig Adams/Tanner Glass/Rob Scuderi feeling to it. How bad they play is irrelevant, specifically Johnson. He will continue to play and that is that. So moving on.

As for the forwards you could take Conor Sheary off the top line, but you would be demoting the player who had the highest xGF among Penguins in Game 1. In hockey it is better to not create anything at all than to create and not finish your chances. Doing nothing (ie third line) is less criticized.

Let’s say you take Sheary off the top line and put Hornqvist in what are you getting? You aren’t getting what you used to, not even close. Hornqvist is in decline. You want to put him on the power play so he can stand in the same ten square feet the whole time, fine. The power play blows and he does create havoc in front of the net. Asking him to skate up and down with Sid the entire game at even-strength is different and asking quite a bit. Here are the last three years of the Penguins offense with Hornqvist on the ice 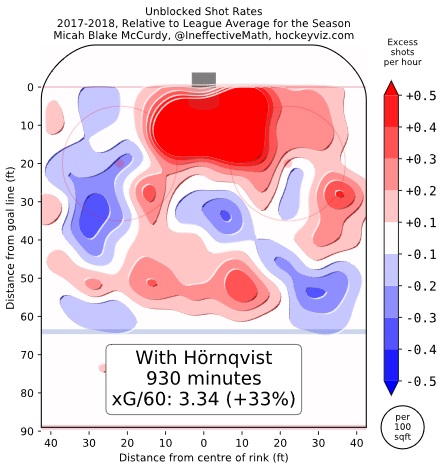 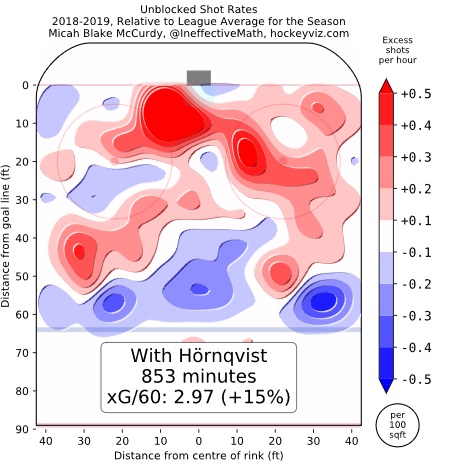 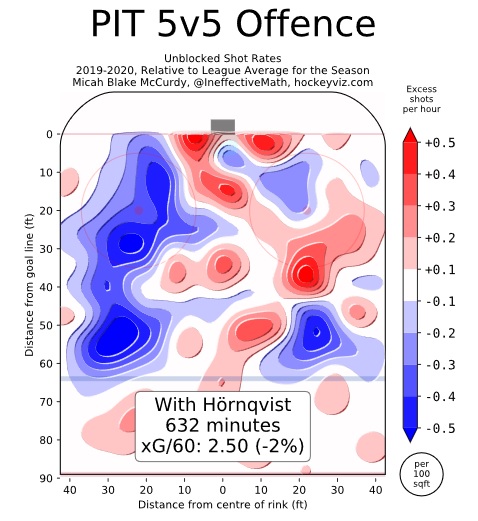 Hornqvist isn’t the player he was. This situation was widely talked about when he signed his 5.3M AAV contract extension. His style of play and age would lend itself to a decline. We are seeing it in year two of the deal. His decline isn’t to the point where he cannot help the team. I am in no way suggesting he is a liability like Jack Johnson. Hornqvist, even at his best, has a limited skill set with very specific things he does well. Things that cause others on the ice to do heavy lifting. His centers have to do quite a bit of work to get the puck up the ice and in a position for him to do the things he is good at. I think this is the biggest reason you see Sheary up with Crosby and not Hornqvist. Sid doesn’t want to have to do everything. He wants to outsource some of that skating. It has been hinted at quite a bit he doesn’t exactly love playing with 72. Sid consistently gets Guentzel and Letang so you have to think if he really wanted Hornqvist it would be arranged. It isn’t like he is playing on Malkin’s line right now.

The way I see it is you have two options if you want to move Conor Sheary off the Crosby line:

1. Drop Sheary to the third line and promote Hornqvist. The hope is Hornqvist’s previous success with Crosby is reignited and Sheary’s speed meshes well with both McCann and Marleau


2. Allow Crosby to take Bryan Rust from Malkin and give Hornqvist to Malkin. You would of course be breaking up one of the most successful duos in the NHL this year in Malkin/Rust.


Or you stick with the lineup that had an xGF% of 68 through three periods the other night. You expect a 5.3M player can help the team in the role he has been given. You look to the third line center, who is playing for his next contract, to step it up. Lastly, you hope the guy chasing a Stanley Cup can figure out a way to contribute in a bottom six role because he isn’t supplanting Guentzel and Zucker to in the top six.

Join the Discussion: » 270 Comments » Post New Comment
More from Ryan Wilson
» Would anybody be surprised?
» That's Staal they got for him?!
» Rutherford has an eye on free agency. Are there any centers?
» Bjugly trade
» Another team out on Matt Murray