Wanna blog? Start your own hockey blog with My HockeyBuzz. Register for free today!
The NHL and the NHLPA have yet to decide what to do with the stats from the play-in games. The regular season has been deemed over, yet the idea of a play-in games assumes the teams are not yet in the playoffs. What happens to the stats? As of right now we don’t have a concrete answer. At the present moment Leon Draisaitl will win the Art Ross Trophy with 110 points. Alex Ovechkin has 48 goals and will be in position to win his tenth(!) Rocket Richard Trophy and seventh out of the last eight seasons. Sidney Crosby being the only player getting in Ovechkin’s way in 2016-17. David Pastrnak also has 48 goals and shares the award, for now.

Evgeni Malkin led the NHL in points per 60 at 5v5 this year according to Natural Stat Trick at 3.43. Artemi Panarin (should win Hart Trophy) was the runner up at 3.28. Leading the league in this stat doesn’t automatically mean they are the best player in the league just like the Rocket Richard winner isn’t always the best (hello Jonathan Cheechoo). We know this because Rene Bourque and Conor Sheary led the league in 5v5 points per 60 a few years back. It is still a great accomplishment and here are the previous season leaders per Natural Stat Trick: 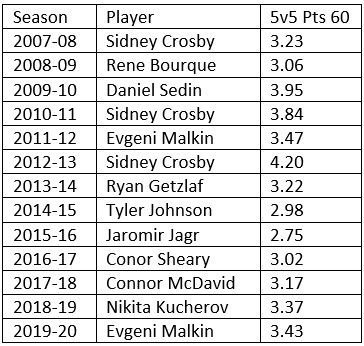 Rene Bourque and Conor Sheary are the obvious head scratchers on the list.

Henrik Sedin was at 3.92 and in second place the year his brother led the league.

Tyler Johnson and Nikita Kucherov give the Lightning two winners and are the only team other than Pittsburgh to have multiple winners.

This year the consensus is that “Malkin is back”. It would of course ignore some obvious things that changed. Not changes with Malkin, changes with players around Malkin. It is no coincidence that Malkin’s most common teammate from the back end this year was Kris Letang and then we had a “bounce back” season for Geno. Funny how that works. Last year his most common linemate from the back end was Jack Johnson with Kris Letang being his fifth most common defender. While it is true Jack Johnson was Malkin’s second most common defender in 2019-20 that shared time was predominately spent with Letang on the ice at the same time as well. This speaks to how great Letang is at what he does and how badly Malkin needed some help from somebody who could actually move the puck from the back end. There’s a huge difference between Malkin getting a full serving of Jack Johnson without Letang and getting Letang as his top TOI defender with Johnson in the mix.

The Letang boost wasn’t the only factor that played into Malkin leading the league in points per 60 this year. He got to play a sizeable chunk of time with Jake Guentzel. Something that never happens if Crosby is in the lineup. This year Malkin spent 284 minutes with Guentzel this year compared to the 46 from last year. Malkin finally got the best forward and best defender to play with. The last time this happened he won an Art Ross and a Hart Trophy in 2011-12. It seems to coincide when Crosby is out. I am not a believer that Malkin “elevates” his game without Crosby in the lineup. I think the answer is simple. He gets better resources without Crosby in the lineup and benefits because of it. When both players are healthy Crosby gets the steady diet of the best winger (Kunitz and then Guentzel) and the best defender (Letang). Malkin gets the leftovers.

Mike Sullivan needs to really think about how he deploys his resources for both Crosby and Malkin moving forward. He can’t just go back to giving Sidney Crosby both Jake Guentzel and Kris Letang. Evgeni Malkin is amazing and you would be artificially lowering his ceiling by not giving him a taste of proper quality of teammate. Don’t neuter the league leader in 5v5 points per 60. Malkin isn’t different than last year no matter how many times certain people want to say it. His deployment was vastly different.

I think Mike Sullivan needs to make a choice to spread the wealth. He either gives Crosby Jake Guentzel or Kris Letang, but not both. He can’t. The first option would be the following:

Crosby gets the majority of Letang’s ice time at 5v5.

Otherwise you can do the following:

Malkin gets the majority of Letang’s ice time at 5v5.

Another crazy thing you could do is… play Crosby and Malkin at the same time at 5v5! Crazy. You know at the ends of periods, using TV timeouts to your advantage, or coming off of extended penalty killing situations where neither player is used. Be creative.

Crosby isn’t the one who makes the lineup decisions, but he has to share the wealth if the team is going to be at its best. You cannot afford to waste Malkin’s ceiling when it is still higher than almost anyone in the league.

Congratulations to Geno on leading the league this year in 5v5 points per 60. You were great this year and you were last year, too. Hopefully the people in charge understand what actually changed.