Wanna blog? Start your own hockey blog with My HockeyBuzz. Register for free today!
The Penguins dropped a closely battled contest against the Washington Capitals this afternoon by a score of 5-3. The win puts the Capitals back into first place in the Metropolitan Division and the Penguins drop to second with a game in hand.

All things considered the Penguins played quite well against a Capitals team who isn’t dealing with the injury bug in the way Pittsburgh has had to deal with. I didn't think this game was going to be as competitive as it was considering what the Penguins blue line looks like. This was an encouraging performance despite the loss.

Penguins actually won the shot attempt battle 45-35 at 5v5 an also the high danger chance battle 12-6. Again, not a bad performance with the current blue line. Jack Johnson and Justin Schultz are not playing well enough and at the moment are sinking their partners. You know things are bad when Bob Grove is using CF% stats to highlight how bad the Johnson-Letang pairing has been

Today neither were a positive and the streak continues for Johnson. This chart is from the Buffalo game, but highlights the need to change the top pairing.

Sabres dismantled the Penguins and only needed half of the ice to do it.

Those all seem like they are coming from the left side of the ice where a certain somebody plays. Must be a coincidence. If the Sabres are able to identify this weakness the better teams in the league are as well.

Brian Dumoulin and John Marino will be making the road trip. They might not play any games, but they will have the opportunity to practice and work towards getting back in the lineup. This is a huge variable in how the Penguins are going to move forward as a contender. They need their defensemen to be able to move the puck to the forwards. A lot of the game today looked like the Dan Bylsma days where the team was limited to stretch passes and tips into the offensive zone. It happened in the past because of the skating and passing limitations of the defensemen and it happened today for the same reason.

Bogosian is still considering options and Carolina, Pittsburgh and Arizona appear to be most interested. It’s believed Toronto’s interest has cooled a bit. Calgary, SJ and Boston also among the tire kickers. https://t.co/rKNRANlypf

Given how physical today’s game was you know Rutherford is itching to add some snarl into the lineup. I remain in the don’t need him camp. The Penguins issue is moving the puck up to the forwards and while this data does not include this year it does provide a recent three year sample of exit and entry skills for Bogosian and Schultz 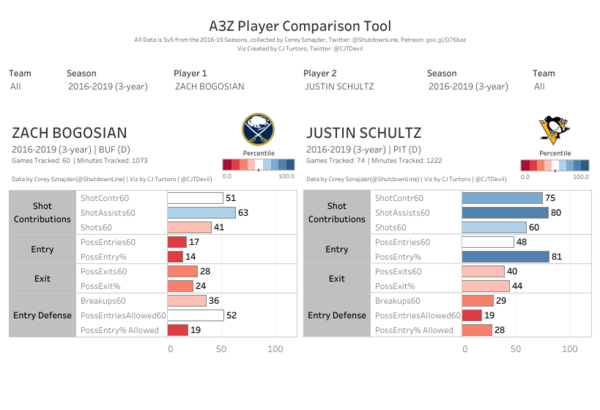 Either several previously sensible people have departed from their senses or any "bidding war" for the services of Zach Bogosian is a complete fabrication. pic.twitter.com/htKfCMSj9L

Schultz is not playing well. I didn’t even realize he has now gone 20 games without a point until writing this piece. That’s not good because Schultz isn’t a good defender. I still like Schultz’s skill set better for what this team is trying to be. The key is going to be the blue line health and the removal of Johnson from the game day roster. Schultz in a bottom pairing without Johnson will be serviceable.

I still don’t mind the idea of bringing Conor Sheary back onto the team. His speed is useful and would really help on the forecheck and navigating the neutral zone. I don’t like the current fourth line and I understand Bjugstad and Kahun will come back and help with the depth, but having some insurance would sure be nice.

If the team isn’t going to bring Sheary back there is another pending UFA I wrote about during the summer as a possible depth addition who can provide some offensive punch. The player is Tyler Ennis and he is having a decent season in Ottawa this year 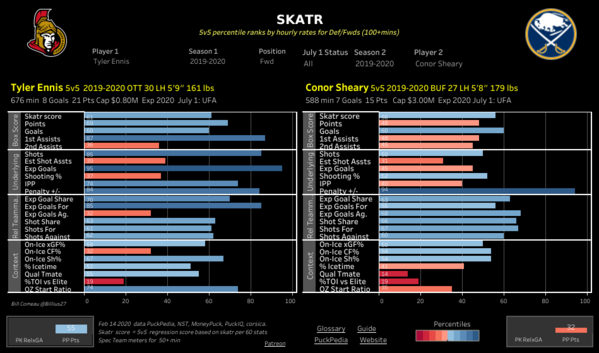 All things equal I would prefer Ennis to Sheary. I think Ennis has more polished hands and is a good playmaker. It would be nice to get either of them.

Lastly, Evgeni Malkin went full Mario Lemieux in the third period so that was cool