Wanna blog? Start your own hockey blog with My HockeyBuzz. Register for free today!
The Penguins came really close to reversing the script from Tuesday night, but they couldn’t score the overtime goal to pull it off. Patric Hornqvist tied the game late in the third period much like how Ryan Pulock tied the game late for the Islanders. It wasn’t to be. The Islanders were able to

Pittsburgh was able to scrape two points in the two games. You can look at it like winning a game or you can look at it as the Islanders gaining two points. The fact is they have to get as many points as possible without Sidney Crosby and Kris Letang. Taking half the points with both of those players out should be enough to keep them afloat. The team isn’t playing bad even with the injuries. It is encouraging for when they get the full product on the ice. 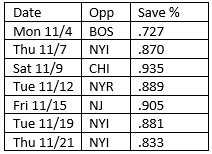 The Penguins can’t afford to have a stretch like this in net at the moment. They don’t have the fire power to overcome it. At least I wouldn’t bet on the current roster overcoming it. The thing is Tristan Jarry has been really good so far as the backup. It is worth throwing him an extra game here or there. The benefit of having a backup playing well is exactly for this situation. I don’t have any long term concerns about Murray. This happens over the course of a season. Even elite goaltenders like Henrik Lundqvist would have stretches similar to Murray’s at the height of their powers.

In Jarry’s four starts this year he has stopped 125 out of 132 shots (.947). Just the act of skipping Murray on the starting rotation might snap him out of things.

Bryan Rust scored another goal. He is up to eight in 11 games. Only ten more to go to hit last year’s career high. I like his chances even with a cold streak baked in. He is shooting 23.5% and I’m going to guess he didn’t figure the shooting thing out to that extent. Doesn’t matter right now he has the hot hand and the Penguins needed a depth player to do this. He has and it should have yielded a few more standings points.

Nick Bjugstad is going to miss eight weeks due to a core injury. Not to be cruel, but the team won’t miss his contributions one bit. He needs to update his Derick Brassard mask to the 2019-20 version. Brassard added and assist last night and has 16 points in 20 games. When Bjugstad comes back I think the team has two options. Try him on the wing where he’s had some offensive success in the past. Or trade him even if he would be the latest in the huge list of players who get acquired and traded within a year. Jared McCann could be an in-house candidate to take over the role.

Brock Nelson has eight goals on the year. Four of them are in the last two games against the Penguins.

The Penguins continue their run against the tri-state area foes with the Devils tonight.

Join the Discussion: » 240 Comments » Post New Comment
More from Ryan Wilson
» NHL has a newly agreed upon CBA for next six years
» We know how the NHL wants to return now we know the when
» NHL outlines detailed return to play plan against tough odds
» No get out of jail free cards for real or arm chair general managers
» Edmonton lures NHL with plagiarized non-Edmonton footage