Wanna blog? Start your own hockey blog with My HockeyBuzz. Register for free today!
The Pittsburgh Penguins are coming off two losses where they probably deserved to win. They held things together during Evgeni Malkin’s extended absence. They are in the thick of the playoff race and even have a little bit of cap flexibility at the moment. Overall things are OK for the Penguins.

One area where the team is not OK has been the power play. The Penguins haven’t scored a power play goal since October 13th when Jake Guentzel scored on the Jets. Since then the power play has gone 0 for its last 21. They have no power play goals in the last nine games. On one hand the Penguins are still earning standings points without one of the weapons they’ve leaned on most the past few years. On the other hand there is still too much talent to not make a go of things with the man-advantage.

Phil Kessel’s absence is definitely something that can’t be ignored. The power play ran through him, not Sidney Crosby, during his tenure as a Penguin. Kessel was excellent in this role. There was always going to be an adjustment period without him. However, there’s still enough talent on this roster to have a highly functional power play. Crosby and Malkin had about a decade sample before Kessel showed up that proved their ability to run a great power play. So what’s the problem?

The first issue is related to Kessel. Their breakout isn’t the same and I don’t think it has been as fluid or as consistently successful as it was before. Not every team can run the drop pass entry. You need a certain group of players with specific skill sets to make it work. The Penguins were definitely a team who fit the bill. Some people don’t like the drop pass breakout. I am a huge fan of it when you have a quadruple threat of Sidney Crosby, Evgeni Malkin, Phil Kessel, and Kris Letang. Forcing the penalty killers to wait flat footed is a great recipe for success with players who can skate the puck and dish it to the next player like those four. This year they are going with a more classic approach and without both Kessel and Malkin (injury). It hasn’t been as successful.

The second issue is something I just noted. Malkin’s injury is one of those things you just have to deal with. You aren’t going to replace what he brings. He’s a monster with zone exits, zone entries, passing ability, skating ability, shooting ability, and vision. Good luck with the “next man up” mentality.

The third issue is not putting players in positions to succeed. This Crosby on the left circle nonsense needs to end and it needs to end yesterday. This doesn’t maximize the Penguins best player’s best assets. The player movement also leaves a lot to be desired. Teams aren’t as scared of the Penguins power play without Kessel and they certainly aren’t as scared of it without Kessel and Malkin. Teams are just packing it in and making the Penguins play on the perimeter. The Penguins aren’t moving around enough and they are not identifying where their 2 on 1’s are. They are not dictating to the penalty killers they are allowing the penalty killers to dictate to them. This is backwards and a recipe for mediocrity even with top end power play players like Crosby, Guentzel, Letang, and Schultz. The nice thing about power play structure is the concepts should translate through all levels of hockey, even the NHL.

I wanted to dive a little bit deeper into this power play issue. Are the Penguins not getting enough shot attempts? Have the high-danger chances dried up? Do these things even correlate to a good power play success rate?

Here is the history of the Penguins power play since 2007-08 with their ability to generate shot attempts and high-danger chances per 60. The numbers are courtesy of Natural Stat Trick 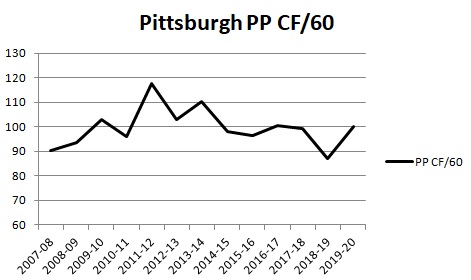 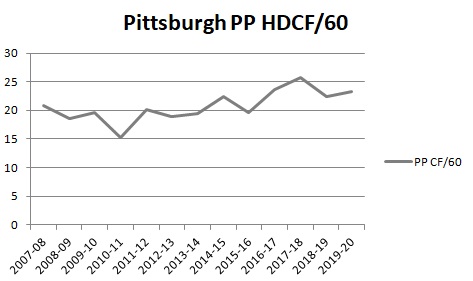 Nothing here suggests the Penguins are significantly lower this year when compared to the past 12 years.

Here is how the Penguins currently stack up against the competition in 2019-20 in these categories. 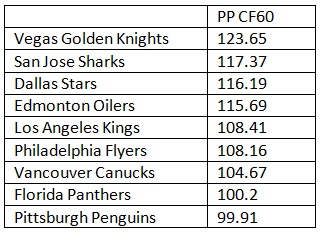 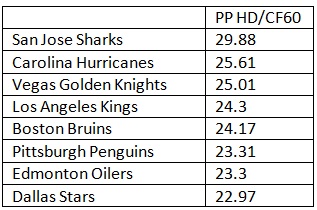 Perhaps not at the very top, but comfortably in the top third of the league in both areas.

You can see that they fare quite well.

With the Penguins still doing OK generating both overall and high-danger shot attempts I wanted to see if this is a predictor of future success on the power play. I compared every team's CF/60 and HDCF/60 with their power play success rate since 2007-08. These numbers are courtesy of Natural Stat Trick and this is what I found 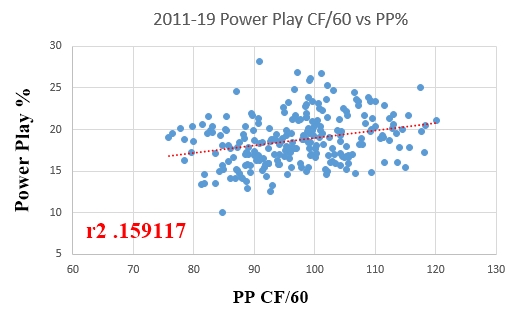 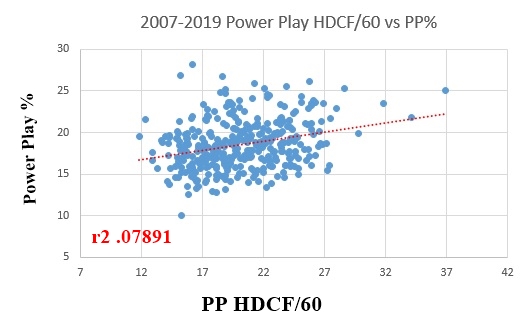 I can't lie I am a little bit surprised by the results. I thought there would be more of a correlation. Furthermore, I thought the high-danger shot attempts would see a higher correlation than all shot attempts. This is over a decade worth of data so can't claim a small sample size. Weirdly enough you can't look to CF/60 or HDCF/60 to predict future results on the power play.

Is this a case of waiting for the Penguins shooting percentage to bounce back? 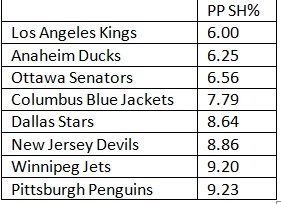 Sure seems that way. They are closer to the bottom than you'd like to see. To put things into perspective they shot 17.28% on the power play last year and were ranked fourth overall in the league.