Wanna blog? Start your own hockey blog with My HockeyBuzz. Register for free today!
Pittsburgh dropped a decision to the Buffalo Sabres last night 5-4 after a Jack Eichel overtime goal. There wasn’t much to take from the game other than the Sabres much better lineup dominated most of the contest and the Buffalo goaltenders played poorly. Pittsburgh was outshot 47-18. Instead of reaching to find meaning in a meaningless game I’m going to focus on the Penguins power play today.

For the first time in camp, the Pens worked on the power play briefly today. We saw a couple combos:

One of the talking points heading into this season is for the Penguins to not be as “risky” on the power play because of the number of shorthanded goals they gave up last year. I’m not having any of it. I do think mistakes were made in areas of the ice that were risky. I also don’t believe last year was unique as far as the Mike Sullivan era is concerned. Here is a history of the Penguins power play since 2007-08 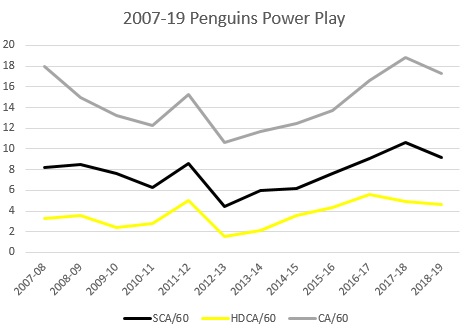 If anything last year was a mild improvement in giving up various shot attempts while on the power play. Why was so much made of this? The same reason people overreact to a lot of things in this sport, save percentage 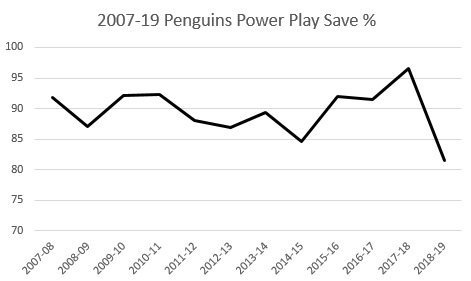 So the worst save percentage in over a decade was framing the conversation. The fact is the Sullivan era power play has had some of the better conversion rates 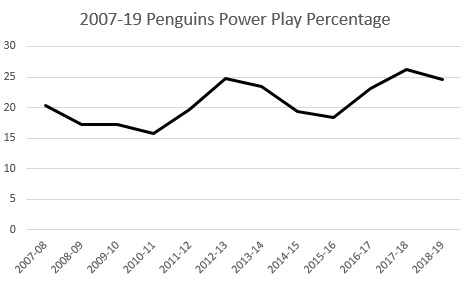 Whatever the Penguins do moving forward without Phil Kessel they shouldn’t be overcompensating for the shorthanded goal problem. The power play has been strength for the team and it needs to continue being a strength. Let’s talk about the personnel.

Most of the examples above have Sidney Crosby, Evgeni Malkin, and Jake Guentzel on the ice. I think those three need to be a staple on the man-advantage. They are the teams best three forwards and have the proper skill set to maximize time and space. The problem moving forward is the lack of a skilled right handed forward to take the Phil Kessel spot on the power play. It isn’t a coincidence the Penguins power play was so good while Kessel was a Penguin. He was the first legit right handed player to be on the left circle since… Mario Lemieux? It stretched the penalty killers out and made life harder for them because they couldn’t shade towards the Crosby/Malkin side all the time like it was for years. The league caught on to the Penguins and you can see in the chart there was a trend going down right before the uptick in most recent years. Unfortunately, Patric Hornqvist is very limited in his ability. He’s a niche player and that niche doesn’t include handling the puck away from the net so he isn’t an option to replace Kessel. Nick Bjugstad and Bryan Rust are not going to cut it either. Without a game changing right handed forward on the left circle the Penguins are going to have to abandon their more stagnant approach on the power play.

I have written about the following power play setup before and it is one I’ve used coaching to great success. The power play involves a lot more movement than what we’ve seen the last few years. The movement is geared towards isolating penalty killers and creating 2v1’s based on how the killers react to the movement. There are always multiple options and if the players read them correctly it will create havoc and chaos which is a good recipe for goal scoring when you have one extra player. Another benefit is the simplicity of the setup which can be run from either side if you have balance of right handed and left handed players. It also reduces risky passing.

Puck starts on the half wall and the player has two options. Low or high. Simple enough 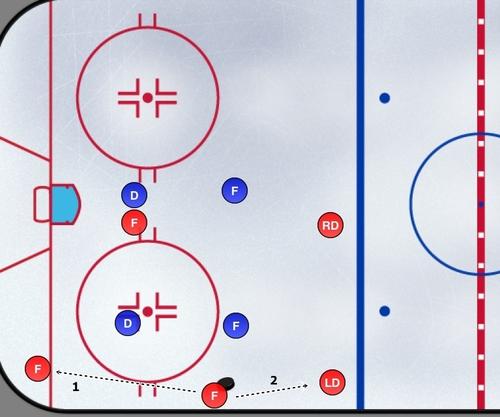 I like kicking the puck down lower because it starts the movement that will begin the manipulation process of the penalty killers. As soon as the player on the half wall kicks the puck down low they cut to the net. Again, two options for the player with the puck. They can either hit the give and go for a great chance or they IMMEDIATELY bank the puck up top. The sooner the puck gets up top the better. It will get the killers to potentially over persue because they are out of position. 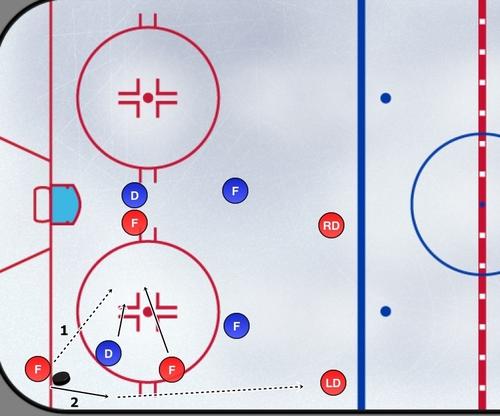 The forward from down low follows his pass to the top of the circle to become an outlet. The defenseman (who should be right handed on this side) walks the blue line hard. The puck is always on their forehand and in a passing or shooting position. The top penalty killer has a decision to make. Do I stay in the shooting lane or do I cheat pass. The great thing about the puck being passed up top early and the defenseman moving quick is that they can’t choose both. The player who released from the half wall on a give and go is now a built in screen. 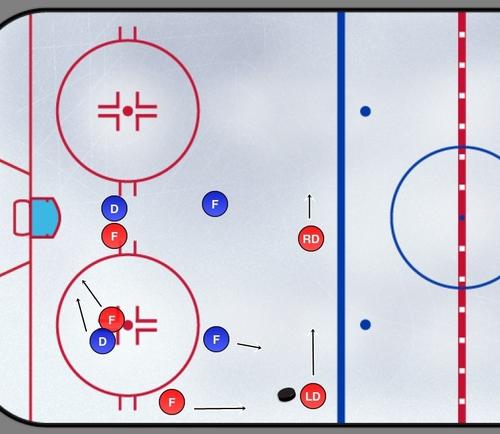 The defenseman walking the blue line has three choices now. He can (A) shoot the puck with a built in double screen. They can pass back to the forward (B), or move the puck to their defensive partner (C). Out of the three options C is the least desirable. 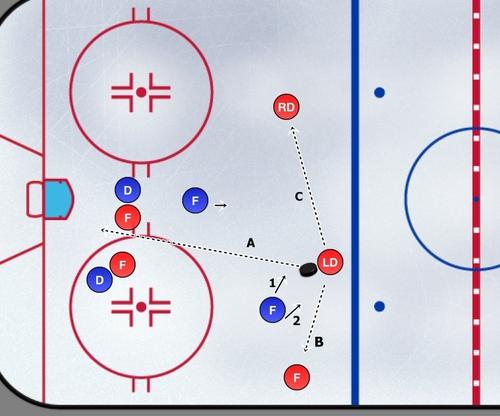 If the defenseman shoots the puck it speaks for itself. There will be chaos in front. If choice B is made the forward has a few options to quickly process. They need to attack the net and react to the penalty killer’s choices. Chances are the low killer will step up and the puck can be kicked low to the forward sliding out. At the same time the forward near the crease slips to the high slot. This draws the killer on him. This hypothetically creates a clear passing lane where the weak side defender can sneak in to the weak post. 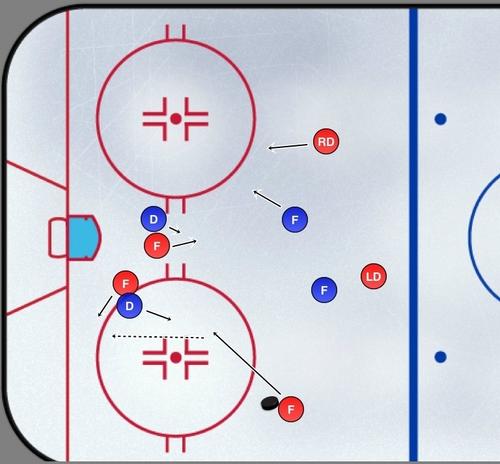 If the puck does get kicked back down low the weak side defender is still an option. The defender in front is either going to slide down to take away the dangerous Royal Road pass or leave the slot open. Sometimes the pass down low may leave that player with a clear lane to attack the net depending on if the killers get caught running around and making mistakes. These mistakes aren’t the norm, but the movement can certainly cause the defenders to do things they normally won’t. 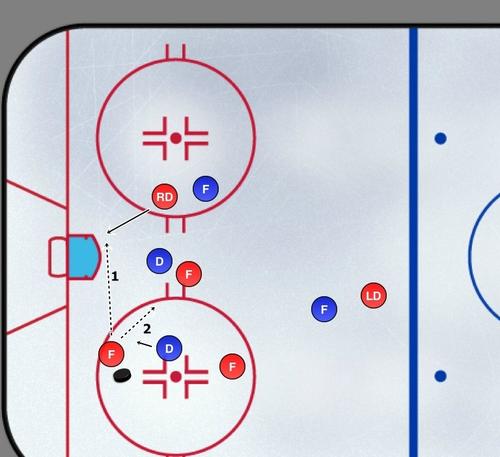 The nice thing about this setup is it isn’t complicated, but it produces the necessary stress on the defenders to create 2v1’s. It is up to the power play to read where their 2v1’s are and continue to expose them. If the play breaks down you can just start over from the beginning. You can run this from either side of the ice with similar success. It can be very overwhelming for the penalty killers to deal with.

I like this setup because it can give Crosby the half wall time he clearly likes, but it also has built in movement which will get him down low and to the net front where he does the most damage on the power play. You can also have Malkin be the defender up top walking the blue line on his forehand that should in theory up his shot totals and chances to get the puck to the net.

The shorthanded goals against shouldn’t be a concern because every step of the way the player has multiple safe options to choose from. Nobody should be caught flat footed anymore. Obviously, hockey is a chaotic sport and things will happen, but these instances should be minimized while not taking away from the attacking ability.

For my money the best personnel units for the Penguins would be similar to the ones they did run in practice:

Tl;dr Don’t overreact to the shorthanded goals against from last year. Have a movement based power play focusing on manipulation of penalty killers for 2v1’s

Join the Discussion: » 145 Comments » Post New Comment
More from Ryan Wilson
» We know how the NHL wants to return now we know the when
» NHL outlines detailed return to play plan against tough odds
» No get out of jail free cards for real or arm chair general managers
» Edmonton lures NHL with plagiarized non-Edmonton footage
» Most players not comfortable with NHL restart plan