Wanna blog? Start your own hockey blog with My HockeyBuzz. Register for free today!
The biggest offseason storyline for the Penguins was their trading of Phil Kessel to the Arizona Coyotes. For right or wrong the Penguins brass had enough of his quirkiness and felt like losing his point per game production was a prudent move. Alex Galchenyuk was the most significant part of the return the Penguins received in the deal. Galchenyuk is a one-time 30 goal scorer and pushes scoring upwards of 20 goals most years.

Galchenyuk alone cannot make up for Phil Kessel’s point production. Nothing in his sample suggests that he can or will. Pittsburgh will be trying to make up for Kessel’s production by committee. Although, for the committee approach to work Galchenyuk is going to have to rise to the occasion and be as close to his 2015-16 as possible. If things go like his 2017-18 or 2018-19 campaign the Penguins are going to be at a deficit.

I’m going to try and look at who Galchenyuk’s most common linemates he has had the last four years and the types of players they were. Has Galchenyuk been placed with players who cannot create shot assists? Was his 2015-16 season a fluke from a shooting percentage standpoint? Is Evgeni Malkin going to be the magic pill Galchenyuk needs to regain his scoring touch?

Both Eller and Pacioretty are strong in their passing. The only low mark for both players was their passing that led directly to one-timers. Shot assists from behind the goal line and across the slot (DZSA60) were both strong and that is a good thing for a shooter like Galchenyuk. Quality of teammate isn’t an issue this year. This was the year he put up 30 goals

Radulov is really good in all areas except transition. Lehkonen is one of the best in the league at dishing from behind the net and across the slot this particular year as he was in the 98th(!) percentile. Radulov was no slouch being in the 79th percentile. Galchenyuk shot 16.3% this year and had 17 goals. He played in 61 games so he would have been closer to 23 goals in a full season. The DZSA60 passes seemed to boost his shooting percentage.

In 2017-18 his most common linemates were Jonathan Drouin and Lehkonen.

Galchenyuk played in all 82 games, but only had 19 goals. That is only two more goals than 2016-17 in 21 more games. I think the key area to look at are the DZSA60 bars. Drouin is only in the 12th percentile. These are the shot assists from below the goal line and across the slot. The kinds of passes that lead to high danger chances. Lehkonen who was a god the year before drops to a respectable but much lower 61st percentile. Galchenyuk’s 2.73 high danger shot attempts per 60 was the lowest of his career. His shooting percentage was only 8.9 and also the lowest of his career. When you think of Drouin you think of a player who is crafty and has a lot of puck skill. For whatever reason it didn’t translate into successful passes into the danger areas and appeared to have a negative impact on Galchenyuk’s scoring touch and goal total.

Last year Galchenyuk played the most with Clayton Keller and Nick Cousins. Unfortunately, Ryan Stimson’s viz only goes up to the 2017-18 season at this time so I don’t have the same chart for consistency here. Instead I shift over to CJ Turtoro’s viz which does have shot assist data, but not as individualized as Stimson’s viz. 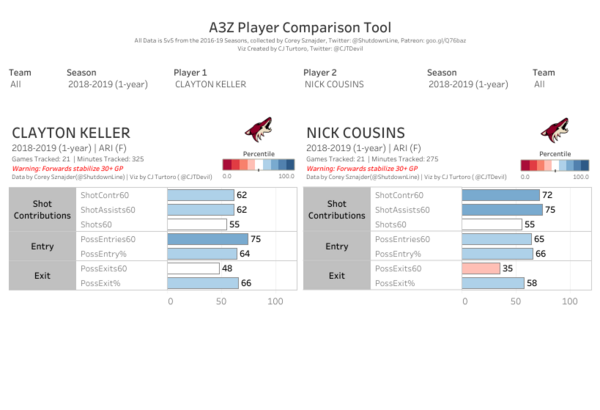 The shot assists are both fine. I wish I knew the DZSA60 for each player, but Galchenyuk’s high danger shot attempts went up to 3.64 per 60 minutes from his career low of 2.73 the year prior. This was an improvement of almost an entire shot per 60. Galchenyuk scored the same amount of goals in ten fewer games this year. Shooting percentage went up to 11.9% which is closer to his career average of 12.3%

So now the big question. Is Evgeni Malkin going to bring the best out of Galchenyuk? We can see Galchenyuk does well when the DZSA60 passing from his linemates are good. Malkin has some of the best shot assist ability of any player in the league. Is DZSA60 a specialty for Malkin?

From 2014-18 Malkin was in the 76th percentile. Pretty good, but if I’m being honest lower than I thought he would be. Malkin used to be elite in this area. He went from the 94th percentile in 2015-16, to 60th in 2016-17, all the way down to 50th in 2017-18. If I were to project where he was in 2018-19 I don’t think it would significantly better. Malkin is still one of the most dangerous passers in the league. His overall shot assists per 60 is in the 100th percentile the last three years. It just isn’t in this particular area which has been shown to help Galchenyuk. Unless Galchenyuk has a torrid year in the shooting percentage department (which seems to be tied to DZSA60) I think we are still looking at a player who will likely finish between 20-25 goals depending on how many games he plays.

In order to get the most out of Galchenyuk it is imperative for the Penguins to give Malkin better deployment. He should play with Marcus Pettersson and Justin Schultz. It has the best chance to get Malkin to play at his ceiling and consequently Galchenyuk’s best chance to score as many goals as possible. The status quo won’t get the best out of Malkin or Galchenyuk.

Considering what the Penguins gave away in Kessel they can’t afford another year of Malkin being held back and they definitely cannot have Galchenyuk scoring fewer than 20 goals.

Join the Discussion: » 138 Comments » Post New Comment
More from Ryan Wilson
» Things are about to get better for the Penguins
» Sleeper agent
» Looking at Brandon Tanev's value so far for the Penguins
» New players, new lines
» I'll Sheary the latest trade details with you