Wanna blog? Start your own hockey blog with My HockeyBuzz. Register for free today!
Wednesday afternoon the New York Rangers announced a move that has been expected for some time, buying out right shot defenceman Kevin Shattenkirk. The Shattenkirk buyout pays out as followed:

After being a dominant puck moving, offensive defenseman for years with the St. Louis Blues, Shattenkirk's numbers have taken a plunge ever since. His brief stint in Washington was fine, but on the Rangers he struggled immensely. The regular 40+ point producer saw his numbers dip to the mid 20's and his ice time slowly cut down. Shattenkirk wasn't only not scoring, he was becoming a liability whenever he was on the ice. At least, that is the narrative coming out of New York, but I am not entirely sure I agree. 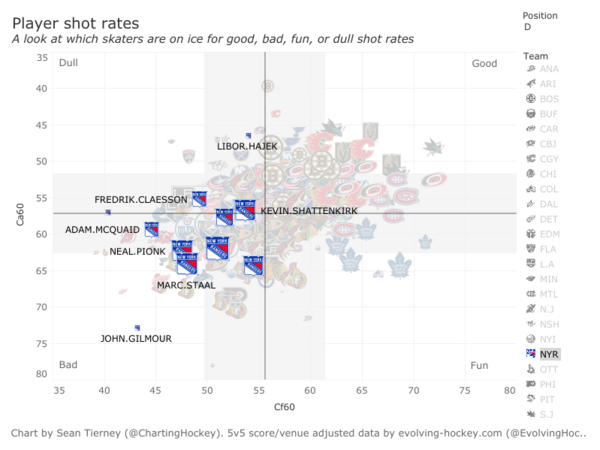 In terms of CF/60 and CA/60, Shattenkirk led the way in New York. Looking at the Rangers defense core as a whole, it appears that his style of play simply did not mesh with the systems put in place by David Quinn.

As of right now, the second pairing right shot defenseman role is likely going to end up being one of three players; Kris Russell, Matt Benning, or Evan Bouchard. Bouchard is likely the best of the three but that doesn't necessarily mean he should play there. Throwing Bouchard to the wolves for his first NHL season does not scream proper development. That means it's likely left to Russell or Benning... here is the issue with that: 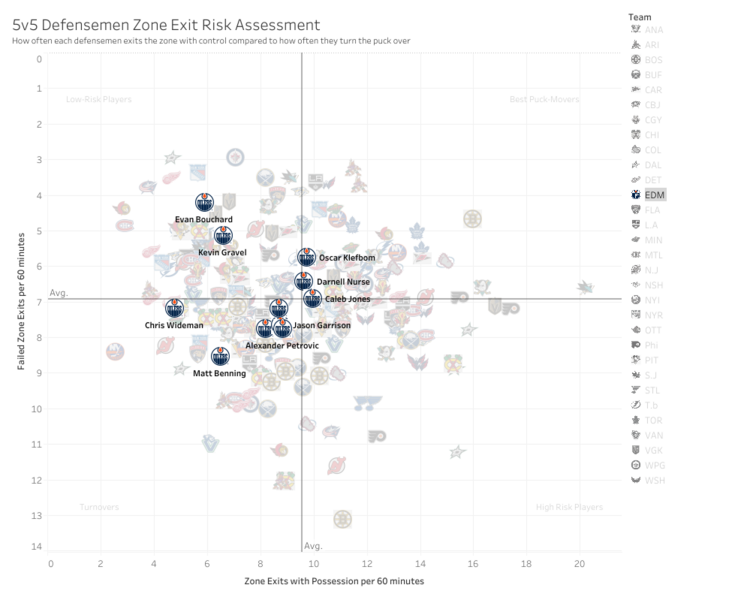 Benning is by far a superior puck mover to Kris Russell but is an extremely high risk player, and has shown throughout his young career to make high risk mistakes in his own end. Russell on the other hand does not turn the puck over... because it is never on his stick. When Russell is on the ice the puck stays in the Oilers zone; period. Russell is fine to have on the ice on a penalty kill when all you want to do is get the puck down the ice, he is not a player who helps move the play forward.

Let's compare that to what Kevin Shattenkirk did with the Rangers. Oh and shout out to Sean Tierney who does an incredible job with creating great visuals and graphs to display player data. 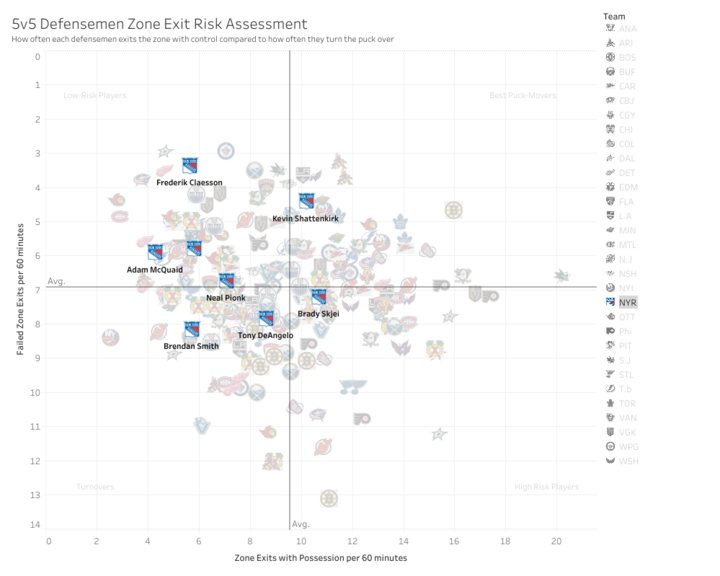 Edmonton does not have a single puck moving defenseman like Kevin Shattenkirk in their system, and even after a poor season, his 28 points last season would have tied him with Oscar Klefbom for second amongst defensemen on the Oilers roster.

I am certainly praising Shattenkirk, but let's be clear this is not a perfect player. For Oilers fans, think Justin Schultz; an offense first defender who will often leave you frustrated as he misses his man or struggles to get back into his zone to defend against the rush. When the puck is going towards the opponents net, Shattenkirk excels, when it goes the other way you do not want him on the ice.

Nevertheless, for an Oilers team that has so few options currently on the right side, Shattenkirk is a strong option on a one year deal. In order for that to happen, a couple things would need to occur.

First, Shattenkirk would have to agree to come here. Reportedly, Edmonton was prepared to trade Taylor Hall for Shattenkirk years ago but the defenseman refused to sign an extension in Edmonton. It is anyone's guess on whether or not that has changed but the opportunities Shattenkirk would get in Edmonton to try and improve his stock would likely be better than he could receive on most other teams.

Secondly the Oilers would have to move out a contract...someone on defense who costs too much and wou it's Kris Russell.

Imagining all that happened, the Oilers could run a defense like this next season

This allows the Oilers to continue to slow-burn Evan Bouchard while replacing some of what the Oilers lost by buying out Andrej Sekera. It isn't a perfect solution, but it is still far better than what Edmonton is currently deploying.