Wanna blog? Start your own hockey blog with My HockeyBuzz. Register for free today!
The Winnipeg Jets need help on right defence and there may be an option coming to market as of 12:00PM EST today in Kevin Shattenkirk if the rumors are true. The Rangers have to do something to manage their salary cap space and become compliant before the start of the season and yesterday news came out that Kevin Shattenkirk and his 6.65M cap hit might be the casualty for the move to compliance.

The Jets should be interested but it would be hard to see how they could do it without moving salary out. (I'm on vacation right now and not looking to see if the Kulikov buyout window has closed or not) That option would work should the purse strings be open to do so.

This is clearly a desperation attmept for the Rangers as by doing so they would take on more salary cap hit than the actual contract. See below and thanks to CapFriendly.com

This move gives the Rangers some short term releif until after next season when they have some options but let's move to the Jets.

The Jets have a roster size of currently and could make that 19 plus two-three from the minors to make it 21 or 22 with 17.592M in cap space. Laine and Connor need deals and therefore assume 15 mill ear-marked for them as has been suggested here in the past. That does not leave a lot of money for Shattenkirk. Enter the Kulikov scenario.

The Jets would save 2.888M and have 20.48M in space. Yesterday I saw something from Evolving-Hockey.com that said the contract expectation for Shattenkirk could be something around 4.5 million but for term, like 6 years. It's doubtful the Jets would take on that but what if they did the same kind of deal that Wayne Simmonds took in Jersey? Remember the old Cheveldayoff standby deal from years gone by to players like Stafford and Jokinen? Two years at 4.5 million per year? Would the Winnipeg Jets as a team, with stars like Scheifele, Wheeler, Connor, Ehlers and Byfuglien plus others be enough to entice Shattenkirk to give the team a chance?

He's a free agent and has to find a home at age 30 in the middle of the summer after most teams have set budgets and rosters. Some will have interest but how many can adjust? For context Shattenkirk was 62nd for defense in EV strength xGF by Evolving-Hockey not far below Trouba at 51 (min 1000 EV minutes played last season). He was 47th in xGA.


He's not a solution to the right side woes, he's a place holder, and one that will likely require some convincing and adjusting to make happen. Is he worth it?

Consider the Jets right side as it stands and it looks like this:

If you add in Shattenkirk it could help provide insurance (albeit expensive) as Tucker Poolman is not very far out of the woods from his concussion woes.

Here's one way of looking at Shattenkirk as a player compared to an outgoing one. 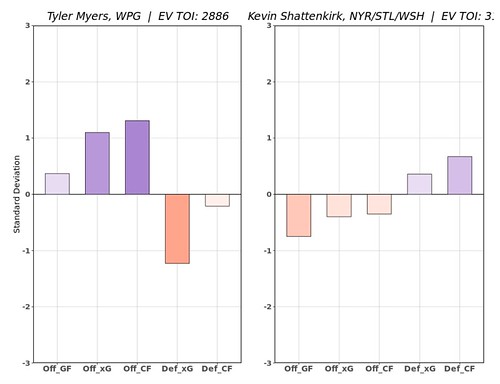 This move would not be without risk but seeing the other moves that have happened across the league while the Jets sit by and watch this could be an opportunity that does not come by again. Now it's possible that none of this can work, especially if the Kullikov buyout window is closed. However, salary can be dumped but at what cost and that cost to accommodate a 4.5 million plus gamble may not be worth the risk. If you look back at Chevedayoff's history and moves this could all be a pipe dream and likely is.

Join the Discussion: » 63 Comments » Post New Comment
More from Peter Tessier
» Who are the Jets and time for me to let go...
» Jets bet Oilers in scoreless but exciting game.
» Digestion Problems: Jets edition
» Laine shines in 5-2 win over Wild
» Hellebuyck, Laine and Defense shine in 4-1 win over Penguins