Wanna blog? Start your own hockey blog with My HockeyBuzz. Register for free today!
Jim Rutherford has done it again. He is not capable of using cap space and signing free agents in a productive way. A year to the day he signed Jack Johnson to his crippling contract he went out of his way to give out another horrendous contract to a depth player. This year he felt the need to go all in and bid against… I’m not really sure who, but they are probably the same teams that were banging down Jack Johnson's door last year. Jim Rutherford outbid the imaginary teams again and now he will get Brandon Tanev for six years and 3.5M. That’s per year...

The Pittsburgh Penguins have agreed to terms with forward Brandon Tanev on a six-year contract. The deal will run through the 2024.25 campaign and carries an average annual value of $3.5 million.

Ridiculous. Jim Rutherford is clowning this team year after year. Every June and July is a joke the past three seasons. I don’t know how many times I have to say Jim Rutherford really isn’t that great at his job and the situation he came into was as easy as it gets in this sport. People are tired of hearing about it, but here we are YET AGAIN discussing what horrifically stupid signing he’s made.

Is this as bad as the Jack Johnson signing? Not quite, but it is really close to being the forward version of it. You should never give depth players who are eligible for unrestricted free agency term. When it was first announced Tanev was getting six years I thought for sure that would keep the money down. Give him a bunch of years because the end of the deal doesn’t matter. The Penguins window will have been closed. Instead this is the type of deal in concert with the other crappy deals that shut the window before the contracts even get off the ground. Jim Rutherford’s work in the summer months has been laughable for a while.

So what do the Penguins get in Brandon Tanev for the same they are paying Bryan Rust? Not much! Why compare him to Bryan Rust? He's the likely candidate to be shipped off to make room on the cap. 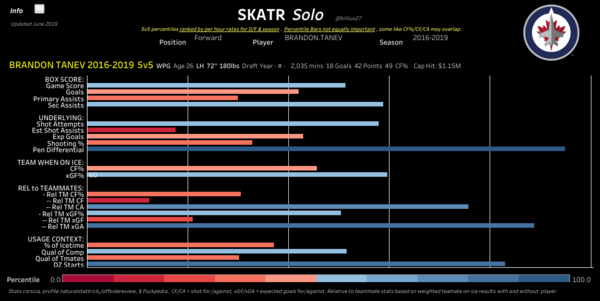 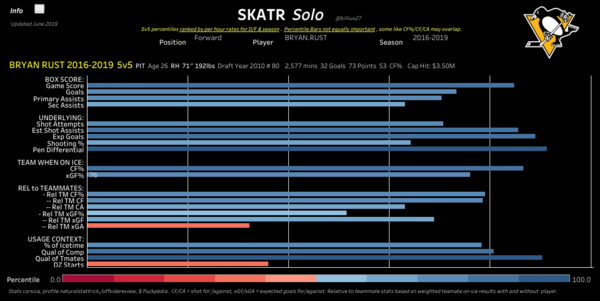 Oh good, Tanev has no ability to move the puck 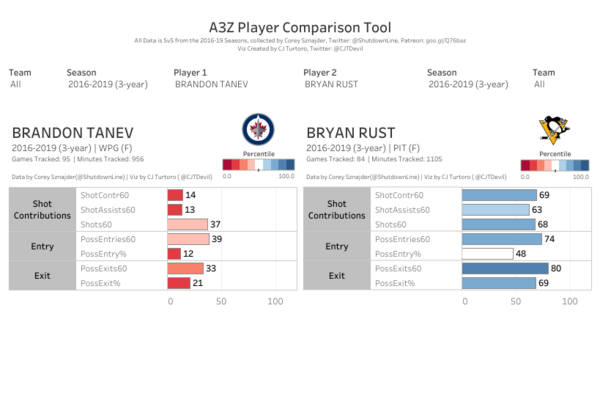 Tanev is 27 years old, has played less than 200 NHL games, has never hit 15 goals or 30 points, has never averaged more than 14 minutes/game, and has never had a positive Corsi Rel season.

This contract is certifiably insane. https://t.co/DzhETmyf4d

Brandon Tanev (6x3.5m with Pittsburgh) is an offensive black hole with some defensive upside and a decent shot.

Look at your life, look at your choices, oh my god. pic.twitter.com/O6VBjDxWhJ

Brandon Tanev was one of the worst players in the league a couple years ago. He's actually been a pretty decent defensive forward since but some of that is from being attached at the hip to Adam Lowry.

Tanner Pearson had more goals and one less point than Tanev and his 2/3.75 was deemed nuclear and re-traded immediately

The problem with giving Brandon Tanev this money and term is that he doesn’t come with Adam Lowry, who played a huge role in his breakout year last year. Away from Lowry, things don’t look as pretty.

brandon tanev exemplifies the sort of abstract intangible quality that rutherford has been bitching about ad nauseum since the sweep. it’s the rutherford staple: identify what you think the problem is and then go off the deep end to “fix” it.

Another banner day for Hall of Famer Jim Rutherford.

Join the Discussion: » 299 Comments » Post New Comment
More from Ryan Wilson
» We know how the NHL wants to return now we know the when
» NHL outlines detailed return to play plan against tough odds
» No get out of jail free cards for real or arm chair general managers
» Edmonton lures NHL with plagiarized non-Edmonton footage
» Most players not comfortable with NHL restart plan